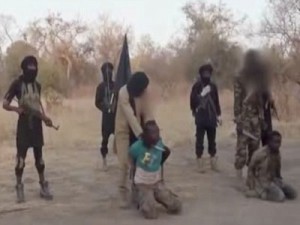 Three villagers were beheaded during weekend raids in Cameroon by Boko Haram insurgents from neighbouring Nigeria, who killed another four people in a separate raid overnight, security forces said Monday.

The first attack took place on Sunday in the neighbouring villages of Tchebe-Tchebe and Dzaba, about 10 kilometres (six miles) from the Nigerian border, said a security agent based in the region.

The beheadings took place in Tchebe-Tchebe.

The assailants also set fire to land owned by villagers as well as a Catholic church, the source added.

The report was confirmed by another local security source, who said that access to the villages was difficult for troops because of the mountainous terrain.

Another four people were killed overnight in the town of Afade, much farther north, near Lake Chad, Cameroon police said.

“Boko Haram attacked the town of Afade around one in the morning (Monday),” a gendarmerie official said, requesting anonymity.

He said the assailants torched police and military facilities and slit an inmate’s throat.

Sunday’s violence followed a series of Boko Haram suicide bombings in the far north of Cameroon, which is taking part in a regional military campaign against the extremists.

The cross-border region is frequently attacked by Boko Haram, which launched its campaign for a hardline Islamic caliphate in northeastern Nigeria in 2009, at an estimated cost of more than 15,000 lives.

On Saturday night, a 12-year-old girl blew herself up in the town of Maroua, killing at least 20 people and wounding 79 others in the fifth suicide bombing in Cameroon in two weeks.

Cameroonian authorities last week extended a ban on the wearing of the full Islamic veil to the east of the country and the Littoral region in the southwest, where the city of Douala is situated. The ban, implemented because the garment can conceal explosives, was already in effect in Cameroon’s far north.