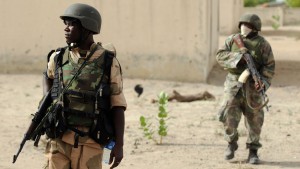 Countries under threat from Boko Haram, the Islamist group waging an insurgency in Nigeria’s northeast, must get used to allowing foreign armies into their territory to hunt down the militants, said Denis Sassou Nguesso, president of the Republic of Congo.

“Countries need to accept that an army from another country enters its territory with a right to pursuit,” Sassou Nguesso said in a March 27 interview in the Congolese capital, Brazzaville. “These are questions we need to discuss together to establish some mechanisms.”

A six-year insurgency by Boko Haram in Nigeria’s northeast, where the group has declared a caliphate, has sucked in troops from neighboring Chad, Cameroon and Niger, which have joined an offensive to combat the militants. West African states have promised to build a military force that will rise to 9,000 troops to battle the group that’s killed at least 1,000 civilians this year, according to an estimate by New York-based Human Rights Watch.

Sassou Nguesso, 71, is among African leaders convening a regional summit in April to tackle Boko Haram. Congo doesn’t border Nigeria and its army isn’t directly involved in the campaign against the militant group.
Military Raids

Nigeria’s elections were postponed from Feb. 14 to give the army more time to subdue the militants and ensure voters’ safety. Since then, Boko Haram has lost territory, including its headquarters in Nigeria’s northeastern town of Gwoza, in a string of military raids. During the rescheduled vote that took place over the past two days, pitting President Goodluck Jonathan against former military ruler Muhammadu Buhari, suspected Islamist militants carried out several attacks, killing at least 43 people.

“You cannot think that you can achieve success in the short term,” he said. “Terrorism is a formidable weapon, it’ll probably be a long fight.”

Sasso Nguesso led the Republic of Congo from 1979 to 1992 and returned to power at the end of a civil war in 1997. He won the past two elections in which the results were disputed by the opposition. Wealth distribution is uneven in the oil-producing nation, with the World Bank estimating that half of its 4.4 million people live in poverty.

In a separate conflict in his region, Sassou Nguesso is leading international efforts to end fighting in the Central African Republic.

As with the battle in Central African Republic, African countries need international support in their fight against Boko Haram, Sassou Nguesso said.

“African countries have armies, yes, but they don’t have the economic and financial capacity to support large war efforts,” he said. “We need money.”