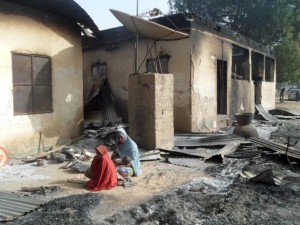 The attack in the village of Dalori began when three female suicide bombers detonated their explosive belts in the name of Boko Haram.

Four hours later, after the jihadists had firebombed houses with local people locked inside, 86 men, women and children were dead.

“They came in through the bush, some of them riding on motorcycles and some in cars,” a resident of Dalori, in Nigeria’s violent north east, told Channels Television.

“People ran helter skelter for safety. Some crossed the river behind our village and we made distress calls to the soldiers but no help came. They started shooting and burnt the town. They even beheaded some of us and set the elderly, who could not escape, on fire,”

Boko Haram, the band of Islamists that has sworn loyalty to Isis and which wants to extend its writ across West Africa, is a group that President Muhammadu Buhari has previously said he has beaten. Its continued presence is an embarrassment for the retired army general. To make matters worse, as news of the attack filtered through, his government had been forced to go cap in hand to the World Bank and African Development Bank, asking for $3.5bn in loans as the fall in the price of oil has caused the Nigerian economy to falter. Last weekend was probably Mr Buhari’s worst since winning the election 11 months ago – and it capped an uncomfortable time in office.

He came to power on a promise of ending the endemic corruption that had become rife under his predecessor, Goodluck Jonathan, and offering his own guarantee as a military man that Boko Haram’s days were numbered.

He has largely over-promised and under-delivered.

“There is a difference between what he would like to do and what he is able to do,” said Richard Dowden, director of the Royal African Society.

“He made a promise to tackle corruption, in a country where the only way to get something done is to bribe somebody. Nigeria is almost ungovernable, but he has also been slow to make reforms.”

If Mr Buhari, “a straight talking military man” according to Mr Dowden, has had little time to cement changes in Nigerian society, he has been quick to laud apparent successes against Boko Haram.

In an interview at the end of last year, he said that the Nigerian army, criticised in some quarters for its ineffective performance against the insurgents, had “technically defeated” Boko Haram.

It is true that the military has enjoyed a number of successes, and Nigeria’s regional standing has gained currency – there is now more cooperation between Nigeria and its neighbours. But, as the attack in Dalori shows, the fight is far from at an end.

The war between jihadists and the Nigerian government has killed 20,000 people in the last six years and driven nearly 2.5 million from their homes.

Mr Buhari has promised “normalcy” for the people in the North-east areas around the town of Maiduguri, the worst affected area, but it appears that the normality is Boko Haram’s ability to act with impunity.

If the Nigerian president has been too quick to declare his successes against Boko Haram, he has had little chance to solve the other problem in his in-tray. Nigeria’s economy relies heavily on oil – about 70 per cent of national income comes from sales of crude – but the recent collapse in its price has caused the country’s deficit to grow. Just a third of Nigeria’s income is expected to come from oil revenues this year.

Africa’s biggest oil producer is looking to borrow up to $5bn to shore up its economy. Up to $3.5bn will be sought from the World Bank and African Development Bank, with the rest borrowed from the capital markets.

“We have held exploratory talks with the World Bank. We have not applied for emergency loans,” said the finance minister, Kemi Adeosun.

Some of this, at least, has been sheer bad luck for Mr Buhari. The price of a barrel of oil has halved since he was sworn in last May.

According to the IMF, Nigeria is expected to report growth of about three per cent for 2015. If accurate, it would be the lowest growth rate for more than a decade.