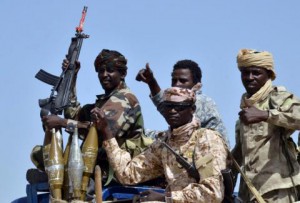 The Chadian government has announced it will start arresting foreigners in the country following a deadly attack in the capital N’Djamena that killed dozens earlier in June.

The twin suicide bombings, which killed an estimated 30 people, were blamed on Nigeria-based terror group Boko Haram, who allegedly attacked in retaliation to Chad’s participation in a regional force aimed at tackling terrorism in northern Nigeria.

Chad’s Prime Minister Kalzeube Deubet said the government would start rounding up foreigners in the country, without giving further details on whom the operations will target. He added that those detained would be placed at centres in Baga Sola, near Lake Chad.

The News Agency of Nigeria (NAN) quoted Deubet as saying the country wanted to get rid of terrorists “once and for all.”

Boko Haram has not yet claimed responsibility for the attack, but has urged Chad to withdraw its troops from Nigeria, warning imminent attacks would take place otherwise.

Following the attack, the first terror incident of its kind in N’Djamena, Chad bombed six Boko Haram camps in northern Nigeria and banned the use of full face veils, arguing that the attackers were wearing the veil as a “camouflage”.

The Nigerian government denied that Chad carried out air strikes in Nigeria, with the army spokesperson Chris Olukolade saying that Chad’s statement was incorrect as the area targeted was not “within Nigerian territory”.

Speaking to IBTimes UK, Nigeria’s government spokesman Mike Omeri said that the Nigerian government could not say whether the attack in Niger, for which Boko Haram claimed responsibility, was carried out in retaliation to the deployment of troops.

“There were attacks, such as in Cameroon, even before [the regional coalition]. This is something we have always tried to prevent,” he said.

The Nigerian government is being aided by mercenaries and troops from Chad, Benin, Niger and Cameroon in its offensive and has scored some successes since the military co-operation started in February.

Newly elected President Muhammadu Buhari, a former military chief, vowed Nigeria would do anything it could to defeat the deadly insurgence and find some 220 girls who were kidnapped by Boko Haram in Chibok, Borno state, in April 2014.

The US announced it would provide $5m (£3.1m) to the regional force in addition to the $34m (£21.6m) already provided to Chad, Niger and Cameroon for logistics and other equipment.