You are here: Home / Analysis / Boko Haram: Cameroon must shift from a military tactic to long-term development 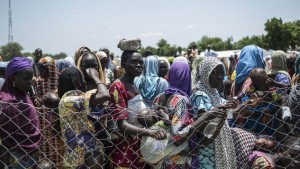 Worldwide indignation has been spurred on by the actions of Boko Haram in Nigeria — from the 2011 bombings of the United Nations headquarters in the capital Abuja to the kidnapping of the 276 Chibok schoolgirls in northeast Nigeria in April 2014.

But, as a report by the International Crisis Group published this month details, not nearly enough attention has been paid to the damage inflicted by the jihadist group in neighbouring countries, particularly Cameroon’s far North.

The report shows that Boko Haram’s presence dates back to at least 2009, when the jihadi group crossed Cameroon’s border after the Maiduguri crackdown and started settling sleeping cells, caches of weapons and using the Far North region as a refuge for its logisticians. Far North traditional chiefs and people in Kolofata, Kousseri and Fotokol said: “We knew all that. Every time we alerted our local authorities they did not consider that seriously.”

Between 2010 and 2012, in towns such as Kousseri, Amchidé, Gossi and Kerawa, Boko Haram was threatening the population to close bars and convert to the “right Islam”, recruiting Cameroonians and assassinating defectors. At the same time the first caches of weapons were found and dismantled. Some administrative authorities now admit that.

“Yes, we were alerted by the population about these people and the assassinations, but what could we do at that time? We thought all that [was] just banditry acts and we did not want to put our foot in the Nigerian problem. You know relationships with Nigeria were not easy at that time,” one district administrator told Crisis Group.

Another local official in Mkolo said: “I personally tried to raise the attention of Yaoundé in my internal notes since 2012 about the Boko Haram preachers who were doing baptisms [a local Islamic tradition] of babies at night in my district, but I received no response from the governor. I think Yaoundé at that time feared Cameroon would be attacked by Boko Haram if they arrested the preachers.”

Boko Haram’s long incubation is the result of the area’s structural vulnerability, underpinned by the deep geographic, socioeconomic, religious and cultural ties between North-East Nigeria and Far North Cameroon. The region is the country’s poorest, with the lowest levels of education and public service provision. These characteristics have allowed Boko Haram to recruit between 3 500 and 4 000 disaffected Cameroonian youth since 2011 through coercion, religious indoctrination, socioeconomic incentives and the promise of a rise in the social hierarchy, including through marriage.

When the Cameroonian army targeted Boko Haram’s remote rear bases, it responded with full frontal assaults from March 2014 to June 2015. Since then the Far North has experienced at least 460 attacks, causing around 1 500 deaths. The terror group’s bold military strategy and heavyweight arsenal surprised many. The group attacked multiple targets at once, with up to 1 000 combatants and even managed to briefly hoist their flag in towns near the Nigerian border, including Kerawa, Achigachia and Balochi.

In one instance, at 5am on July 27 2014 the residents of Kolofata in the district of Mayo-Sava in Cameroon’s Far North awoke to the sound of gunshots. Two simultaneous attacks by Boko Haram were underway. The attackers kidnapped numerous people, including the town’s mayor and his wife, as well as the Cameroonian vice-prime minister’s wife and 14 members of his family. Eleven civilians and two police officers were killed, their bodies left in the streets.

The region was terrorised by the systematic targeting of “undevout” Muslims and — to a lesser extent — Christians. From July 2015, weakened through stronger and co-ordinated responses from the region’s militaries, Boko Haram has prioritised improvised explosive devices, ambushes, and small assaults on villages. Suicide attacks, predominantly using young girls, started in July last year, targeting markets and mosques.

All this caused a surge in people seeking safety. In Cameroon 155 000 people were internally displaced. At one point between 2014 and 2015, 73 000 Nigerian refugees had fled to the country, overwhelming Cameroon and humanitarian nongovernmental organisations. Forty thousand of these refugees were sent back to Nigeria.

Forced returns have since stopped. The largest United Nations Refugee Agency camp, in Minawao, has around 59 000 residents and there is a continuing demand for places. Tension and insecurity have caused rifts in society, including the stigmatisation of Kanuri people, the largest ethnic group in Boko Haram.

The government initially reacted slowly. But following the rise in attacks, anti-terrorist laws were adopted and new military operations started. A ban on burqas, closures of borders, restrictions on motorcycles, bar curfews, and occasional police brutality have put strain on the population and have sometimes caused further radicalisation.

In 2014, army commanders were replaced with new local officers, new military bases were placed in strategic border towns and new military operations launched. Although numerous human rights abuses by the security forces have worryingly not been dealt with, these measures have increased security and improved the population’s view of the army.

International military co-operation has also helped in the fight against the militant group. In 2015, Chad bore the brunt of the insurgency as Boko Haram took control of roads through the Far North that are the main supply routes for Chad’s capital, N’Djamena. The Lake Chad Basin’s Multinational Joint Task Force was revived, and Chadian soldiers crossed the border into Cameroon, inflicting some heavy damage on Boko Haram units. Encouraged by local administrations, local vigilante and self-defence groups have also worked in collaboration with the army, manning security checkpoints, neutralising suicide attacks and engaging in direct combat. International partners have also supported the force, led in Cameroon by the United States and France.

For the moment, the Boko Haram threat is contained, but it has not gone away, nor has its effect on people been dealt with. Any assistance provided to the traumatised population should build on existing community cohesion and avoid stigmatisation of any groups.

Awareness should be raised regarding religious radicalism while strengthening dialogue on tolerance and religious openness within families and communities.

Former Boko Haram members should receive a punishment relative to the degree of their involvement. At present a large number of Boko Haram suspects are in jail with little prospect of a trial.

Informants and low-level logisticians not suspected of being involved in serious human rights abuses could usefully receive restorative justice focused on social reintegration. Ideological leaders and resolute Boko Haram fighters must receive a more punitive justice. Distinguishing between the two and accelerating judicial action is critical to halting resentment building in the country’s overcrowded prisons.

To build long-term resilience among people living in the Far North, the region should receive a fair share of development and investment funding.

Providing legitimate opportunities for young people, reopening trade routes and promoting economic activity is key to shifting from a security-based approach to a development-focused strategy. This is vital to bringing back sustainable peace to the troubled region.