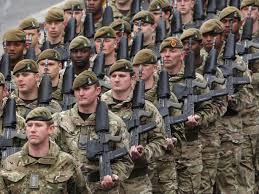 The British Secretary of State for Defence, Mr Michael Fallon, has said his country will deploy additional military advisers and trainers to Nigeria to help in the fight against Boko Haram insurgency.

Fallon stated this while fielding question from State House correspondents after a closed door meeting with President Muhammadu Buhari at the Presidential Villa, Abuja on Monday.

According to him, the military personnel, who will be in Nigeria next year, will be offering training to improve the Nigerian Army’s resilience to Improvised Explosive Devices (IEDs) left behind by Boko Haram.

“Britain and Nigeria are both democracies; we are free peoples, free to choose our governments.

“These terrorists – ISIS, Boko Haram – they are opposed to us, our ways of life and they need to be defeated.

“So, we have been discussing today what more Britain can do; can we step up our military effort with more training, more help in dealing with Improvised Explosive Devices (IEDs) and with dealing with medical evacuation and airfield defence.

“And what more can be done to improve the intelligence Nigeria needs to deal with terrorism.

“Well, this year, for example, we have had some 130 military personnel here helping to train the Nigerian Army.

“Next year, I want to more than double that to more than 300 personnel are coming to offer training and particularly to improve the Army’s resilience to IEDs, which obviously have been left behind by Boko Haram when they were being moved out of the villages they captured.’’

He stated that British government would want to do more to help stabilize those areas liberated by the soldiers.

According to Fallon, the British government will not only be assisting in the provision of security and rehabilitation of the affected areas but will ensure economic development of the areas.

“The President and I are aware both have to do with this kind of terrorism facing our countries.

“So, he has welcomed our offer of support to help to clear the terrorists out of the North East of Nigeria.

“And we are going to be working together on a wider issues of stabilization and economic development of these areas, providing long-term security.’’