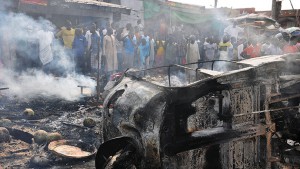 A female suicide bomber detonated an explosive on the outskirts of Maiduguri, the Borno State capital at the weekend, killing 16 people.

“At about 4:30 p.m. on Saturday, they brought casualties from the blast scene …16 bodies were deposited with 24 injured,” Lawal Kawu, a paramedic at the teaching hospital in Maiduguri, told Reuters.

He said some of the injured were also in critical condition.

Zakariya Shettima, who lives nearby and arrived on the scene after the blast in the small community of Musari, said he saw blood and body parts and that it had left a crater and destroyed several shops in the market.

He told the News Agency of Nigeria (NAN) in Maiduguri, that four persons were also injured.

“A female suicide bomber detonated an Improvised Explosive Devise (IED) strapped on her body along Baga/Monguno highway, killing herself and two others on Saturday.

“Four persons sustained injuries during the attack,” he said.

He also confirmed an IED explosion near a military check point in Konduga Local Government Area, in which two persons were injured.

“It is true that we had a suspected IED explosion at Tungushe village in Konduga LGA on Saturday near a military check point.

“Two persons were injured and they are now being treated at the hospital,” he said.

Opadokun advised residents to be vigilant and report strange objects to the nearest security check point for action. (NAN

Boko Haram has killed thousands of people and displaced some 1.5 million in an insurgency to establish an Islamic caliphate in the northeast of Nigeria but appears to have lost most of the territory it seized to government counter-offensives this year.

There was no immediate claim of responsibility for the attack, which followed two weekend bombings that killed at least 30 people and also appeared to be the work of Boko Haram.