You are here: Home / Africa / Boko Haram attacks signal resilience of ISIS and its branches 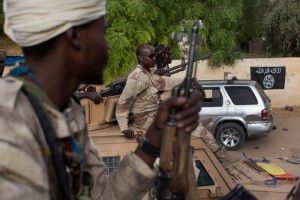 The military convoy was rumbling across a river near the border last month when soldiers suddenly realized they were surrounded. More than 100 Boko Haram fighters, some of them on horseback, had encircled the vehicles, ready to strike.

The 300 soldiers from Niger and the handful of American Special Operations forces accompanying them called for help. Soldiers from Chad rushed to the area, and fighter planes from Niger buzzed overhead, bombing the militants, killing some and sending others fleeing. This time, at least, the quick international teamwork averted what could have been a deadly militant ambush.

Defeating Boko Haram was a flagship campaign promise of President Muhammadu Buhari of Nigeria, the former general who took office a year and a half ago. Since then, the Nigerian military, aided by neighboring countries — along with training from the United States, Britain and France — has made huge advances. Mr. Buhari has claimed for months that Boko Haram has been defeated, and this month he reveled in the release of 21 of the nearly 300 girls kidnapped from a school by Boko Haram more than two years ago.

Yet a troubling new series of attacks in Nigeria and the neighboring country of Niger, including one that killed dozens of soldiers, highlights how Boko Haram is far from eliminated. With the rainy season ending and roads becoming passable again, officials are bracing for more ambushes like the one at the river crossing.

Boko Haram has pledged allegiance to the Islamic State, and Western intelligence officials believe the recent strikes were carried out by a group that splintered off with the Islamic State’s blessing to focus on Western and strategic military targets. Now, the group is unleashing the kinds of military attacks that had been on the wane in past months, restoring a deadly urgency to the conflict just as it seemed the militants were finally losing traction.

The splinter group has stated its intent to focus its attacks “away from local Sunni civilians and towards military and Western targets,” said Cmdr. William J. Marks, a spokesman for the Defense Intelligence Agency in Washington.

The renewed violence offers insight into the reach of the Islamic State. As it loses ground in Iraq and Syria, the group is relying on affiliates like this Boko Haram faction to hold their ground. Other affiliates are also trying to keep up the fight, even under increasing pressure from the West. The Libya faction, for instance, has taken a pounding in Surt, but many of its fighters have simply scattered to the south and other places, where American counterterrorism officials fear they will regroup to fight another day.

The recent Boko Haram developments illustrate the very adaptive and resilient nature of the Islamic State, often called ISIS or ISIL, and its branches.

“Both ISIL and its regional affiliates are under increasing pressure, and both sides have increasing incentive to deepen the center-affiliate bond,” said Jennifer G. Cooke, director of the Africa program at the Center for Strategic and International Studies in Washington.

Boko Haram has ravaged Nigeria and other sub-Saharan nations along Lake Chad, killing civilians, kidnapping people and seizing entire villages. At its peak, the group pummeled major military targets and even controlled large swaths of territory.

But in the past year or so, as Nigeria’s president launched a renewed military offensive against the group, Boko Haram’s operations became less organized and more opportunistic. Led by Abubakar Shekau, notorious for his wild YouTube rants with a Kalashnikov slung across his chest, Boko Haram’s battleground strategy often consisted of sending men, women and children strapped with explosives into markets and mosques to blow up everyday citizens.

Evidence of a weakened Boko Haram had begun to emerge. Fighters retreated into the Sambisa Forest as a multinational military coalition gained traction and squeezed the group’s supply lines.

Some of the newly released schoolgirls offered reports that demonstrate the group’s weakened status. When the girls were first brought to the forest by their captors more than two years ago, the fighters had a surplus of cars and motorcycles, according to Yakubu Nkeki, chairman of the Abducted Chibok Girls Parents Movement for Rescue, who has spent time with the girls. Now, fighters have no vehicles and use bicycles and donkeys to get around, the girls told him.

In the beginning, the militants routinely slaughtered cows for feasts. They had so much food, the girls told Mr. Nkeki, that sometimes they used sacks of rice to fill potholes or control erosion.

More recently, the Nigerian military has been reporting that captured fighters are scrawny from hunger. The newly released girls appear gaunt, their bony shoulders poking out of colorful dresses.

Throughout the region, word of divisions within Boko Haram and defections has spread. Some fighters have even been turning themselves in to the Nigerian military, which has offered amnesty if they agree to take part in a “deradicalization” program. Some officials also think the release of the schoolgirls from Nigeria is a sign of defections in Mr. Shekau’s group.

The biggest sign of trouble in Mr. Shekau’s ranks came in August when news of a factional split was announced in an online newsletter for the Islamic State. Boko Haram appeared to be divided along theological lines, with a new faction disavowing the random killing of Muslims that had taken place under Mr. Shekau’s leadership. Instead, this new wing has pledged to focus on Western and strategic military targets.

Led by Abu Musab al-Barnawi, thought to be the son of the founder of Boko Haram, the new faction appears to be concentrated along the northern edge of Nigeria and into Niger. The new attacks suggest that the splinter group has found new ground to operate in and a new sense of purpose, emboldened by its Islamic State endorsement.

In June, the Barnawi-led faction swarmed a military post in Bosso, Niger, killing 32 soldiers and wounding more than 60 others. Militants made off with weapons and ammunition as soldiers fled the post.

Then this month, fighters attempted a jailbreak in Niger at a facility where Boko Haram militants were being held. Officials suspect the perpetrators of the attack, which was thwarted, were members of Boko Haram, but their allegiance has yet to be confirmed.

Fighters believed to be Boko Haram members also raided two medical facilities in Niger this month, making off with medicine and equipment.

And then again this month along the Niger-Nigeria border, soldiers were ambushed again, leaving 13 of their ranks wounded. Some are still missing in action, according to a news release from the Nigerian military.

Western intelligence officials believe the new attacks are energizing a multinational effort to battle Boko Haram that, until now, has had mixed success.

A Multinational Joint Task Force made up of soldiers from Nigeria, Niger, Chad and Cameroon has slowly made headway in sharing intelligence and launching attacks together. During the rainy season, a group of Chadian soldiers moving toward Lake Chad near Bosso, Niger, became bogged down along mud-clogged roads. Instead of turning back, the soldiers set up camp for weeks to wait for drier weather so they could push forward.

But operations against Boko Haram have also suffered setbacks. The most recent was several weeks ago when soldiers from Nigeria launched an attack across the border that erroneously killed several soldiers from Niger, according to Western intelligence officials and security operators in Niger.

The multinational forces have struggled with communications. Language is a barrier — English is the main language in Nigeria, but French is spoken in Niger, in Chad and by many in the Cameroonian military. Top-secret information sometimes flows slowly and is passed along on mobile phones across unreliable cell networks. Radio gear is incompatible in some cases — Nigerians use American radios, but in Niger soldiers use French-made devices. The militaries are about to receive technology that will help make the radios work together.

“We have good cooperation between all our forces,” said Col. Mahamane Laminou Sani, director of documentation and military intelligence of Niger’s armed forces.

For the moment, in the homeland of Boko Haram, Nigeria, celebrations were still underway over the release of some of the schoolgirls.

“We are happy for seeing this wonderful day,” said one of the freed girls, Rebecca Mallum, speaking at a meeting with Mr. Buhari. “The grace of the Lord show us now we are together.”