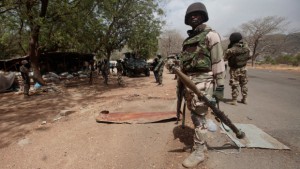 Boko Haram fighters in motorized canoes attacked a Niger army base on an island in Lake Chad, the body of water touching all four countries that have been targeted by Nigeria’s Islamic insurgency, Niger’s defence ministry said Saturday.

The army may have suffered “heavy losses” in the attack on Karamga Island, said a Niger military source in the region who spoke on condition of anonymity because he is not authorized to speak to the press.

Casualty figures were not provided in a defence ministry statement broadcast Saturday night on state television.

In the latest attack, the assailants approached at dawn on Saturday in about 10 motorized canoes, the defence ministry statement said.

“Operations are ongoing with the aid of allies” to put an end to the insurgent movement, the statement said.

Niger joined a regional offensive earlier this year that is credited with retaking large swaths of territory in Nigeria from Boko Haram. The original plans called for an 8,750-member regional force with troops also coming from Nigeria, Chad, Cameroon and Benin.

In addition to the Lake Chad violence, Niger towns bordering Nigeria were targeted in the early weeks of the offensive.