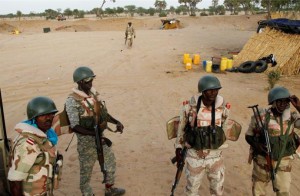 At least 22 soldiers have been killed in Niger after unknown gunmen opened fire on security forces at a refugee camp for displaced Malians, officials said. The camp is situated in Tassalit village in Niger’s western Tahoua region, roughly around 525 km (326 miles) northeast of the capital Niamey, Reuters reported.

“We received information of an attack on the camp in Tassalit. For the moment we are told there are 22 dead, but that is not the total death toll,” Niger’s Prime Minister Brigi Rafini said in an address broadcast on state television.

He did not comment on the identities of the perpetrators or what their motive could have been. Nor did he reveal if any civilians were wounded or killed. But he said he feared the death toll could rise.

According to the Associated Press, an official, speaking on condition of anonymity, said three soldiers were also injured. He said the assailants targeted a military post near the camp.

The soldiers were guarding the camp, sheltering Malians who had fled to neighbouring Niger following Islamist militants‘ attacks there. Some of the militants are reported to have links to the al-Qaeda terror group. They had seized vast areas of Mali’s desert in 2012.

A French-led military intervention had driven out the extremists a year later, but the northern and central parts of the country are reported to be still unstable with escalating violence across Mali.

Besides, Niger’s army is fighting Boko Harammilitants, who are mainly based in neighbouring Nigeria but have launched attacks in several countries in the Lake Chad region.

In addition, Islamic State militants in Libya, bordering Niger, are thought to have raised concerns for Niamey as fears mount over the jihadists spilling over the frontier due to a government offensive in Libya.

In an operation against Boko Haram, who have rebranded themselves as Islamic State’s West Africa Province (Iswap), 14 troops from Niger and Chad were killed, and 39 suffered injuries between July and September.

Earlier in June, in a surprise attack, described as the deadliest-ever in the country, the militants killed at least 30 Niger troops. But during a three-month joint operation by Niger and Chad forces after the attack, about 123 Boko Haram militants were killed, Niger’s defence ministry said on 30 September.