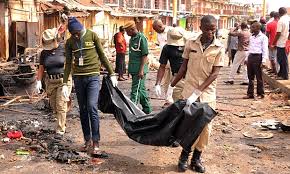 At least 16 people were killed and six others abducted in Nigeria when suspected Boko Haram Islamist militants attacked a village in the northeastern Biu district on Christmas Day, residents said.

Houses were burned and shops looted by the gunmen, who attacked Kimba village as night was setting in, Ishaq Abubakar, who escaped the attacked and fled to Biu town, said by phone on Sunday. Abubakar said he counted 16 bodies after the raid and fled with many survivors to Biu for safety. Yusuf Ibrahim, a leader of the vigilante volunteers in the area, also confirmed the attack in a phone interview.

Boko Haram militants are in the sixth year of a violent campaign to impose their brand of Islamic law on Africa’s most populous country and biggest economy. President Muhammadu Buhari, who took office in May, has given the army until the end of this year to crush the insurgency.