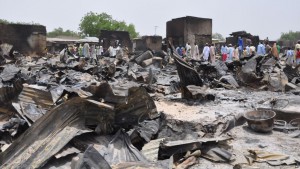 At least 80 people were killed and about 150 injured in multiple bomb attacks in northeastern Nigeria’s Borno state on Sunday evening, police and witnesses said on Monday, reports Reuters.

The state is the birthplace of the insurgency waged by Boko Haram and has been the focus of attacks by suspected members of the militant Islamist group that have killed more than 800 people since President Muhammadu Buhari took office on May 29.

Three bomb blasts in the state capital Maiduguri around 7:30 p.m. (1830 GMT) left at least 54 people dead and 90 injured. Around two hours later, two bombs exploded at a checkpoint some 135 km away at a market in the town of Monguno.

Locals residents and a hospital source said that attack killed 27 people and injured 62 others.

No one has claimed responsibility for the attacks but they bore the hallmarks of the jihadi sect, which has been trying to carve out a state in the northeast of Africa’s most populous country since 2009.

The Boko Haram insurgency has killed thousands and displaced 2.1 million people. Buhari’s March election victory owed much to his vow to defeat the insurgents, but there was a spike in attacks across northern Nigeria in the two months following his inauguration and Maiduguri was hit on a near weekly basis.

A new offensive launched by the Nigerian army to clear Boko Haram out of more towns over the last month has led to a sharp drop in the frequency of attacks in Borno, the worst affected by the insurrection, and neighboring states.

Maiduguri has been free of attacks for about a month. It was last hit by a bomb at the end of July and there was a skirmish with suspected Boko Haram militants on the outskirts of the city in mid-August.