You are here: Home / Africa / Boko Haram: 7 killed, 6 injured in another suicide bomb attack in Nigeria 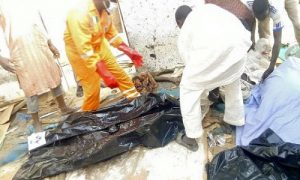 Murtala Ibrahim of the Borno Police Command Public Relations Unit, confirmed the incident in a statement he issued in Maiduguri.

“Yesterday at about 22.45 hours, two suspected female suicide bombers detonated explosives strapped to their bodies at Mandarari ward in Konduga LGA, killing themselves and five others.

“The corpses and injured persons were evacuated to General Hospital Konduga, and normalcy restored to the area.”

Use of suicide bombers by the Boko Haram on civilian and military targets appear to be on the increase in 2015.

Earlier on Wednesday night, three suicide bombers who attempted to attack a military outpost were killed by soldiers after which their explosives detonated.

The three female teenage suicide bombers attempted to attack a military outpost popularly known as “Gontanamo” along muna garage at about 10:05 p.m. on Wednesday.

After being sighted by the troops in their attempt to gain access to the premises, the bombers were shot leading to the explosion of their concealed bombs.

The spokesperson of the National Emergency Management Agency, NEMA, in the North-East, Ibrahim Abdulkadir, confirmed that the corpses of suicide bombers were evacuated by emergency officials

“We have evacuated the corpses of female teenagers. One security personnel who was injured is being treated,” he said.