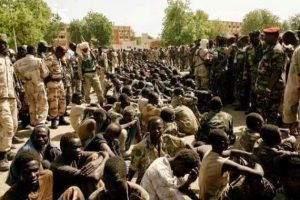 A total of 400 Boko Haram fighters of Cameroon nationality were said to have handed themselves to local vigilante group at the town of Mozogo on Nigeria’s border in Northern Cameroon, like reported by dailypost.ng .

Head of the vigilante group, Ousmane Kouila, who was in Maiduguri on Monday and spoke to newsmen said they were out on a patrol in the border area when they met the fleeing Boko Haram fighters along with their families.

He said, “Among the people we handed over to the Cameroonian authorities today are 70 men, 86 women and 244 children.

“They confessed that after spending two years with Boko Haram, they decided to flee their families and hand over themselves. They said they had fought for Boko Haram and chose to lay down their arms on their own will.”