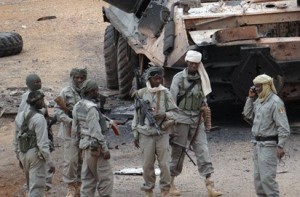 Thirty-eight people, including five attackers, were killed and another 51 wounded in multiple suicide bombings that targeted a market and refugee camp in Chad.

The attacks took place in Baga Sola village near the Nigerian border, with the terror sect Boko Haram suspected as the brain behind the insurgency.

The head of the gendarmerie in the capital N’djamena said two groups of suicide bombers attacked the market and refugee camp.

Gen. Banyaman Cossingar, director general of the gendarmerie, said a group of women blew themselves at the market, killing at least 16 people while a second group of suicide bombers went to the refugee camp, killing at least 22 people.

Col. Azem Agouna Bermandoua, spokesman for the military, said there was a triple bombing in the village. He said they suspected Boko Haram.

Niger, Cameroon and Chad have all suffered a spillover of violence from Boko Haram’s north Nigerian strongholds.

Chad spearheaded a regional offensive earlier this year that drove the Islamist fighters from many of their bases. However, the group has fought back, launching a wave of cross-border attacks and suicide bombings.

“We heard three explosions. The market is on fire right now,” said one of the security sources.

Niger, Nigeria, Benin, Cameroon and Chad have agreed to establish an 8,700-strong multinational force to take on the militants, though its formation has been delayed.