You are here: Home / Africa / Boko Haram: 27 missing policemen yet to be declared dead 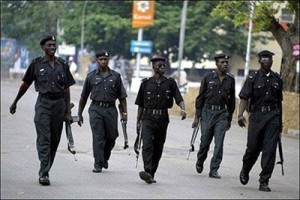 Arase responding to questions from reporters after inaugurating the Board of Directors of the Nigeria Police Property Development and Construction Company Ltd. (NIPPDCC).

The IGP explained that the police will follow its tradition of declaring officers that got missing in battle dead after the lapse of a period of time which he declined to give.

He said: “About our colleagues, who are missing in Gwoza, there is a tradition in the police force.

“When officers are missing in battle, we do not declare them dead or missing until after a period has lapsed.

“So, we are still waiting for that period to lapse, and if we cannot find them after that time, then, we will formally declare them either dead or missing,’’ Arase said.

Thirty five policemen were declared missing on August 20, 2014, after the insurgents attacked Gwoza, where one of the police training schools is located.

However, on 26, August 2014, the Police spokesman, CP Emmanuel Ojukwu, a Commissioner of Police told reporters that eight of them were found, leaving 27 still missing.

Earlier, he said that the current police management was passionate about the welfare of the inspectors, rank and file, who were mostly operational personnel.

Arase stressed that the welfare of those categories of personnel needed to be given priority to stamp out corruption in the force.

He announced that 36,000 of them would by next week proceed on training preparatory to their promotion.

“We have a social contract with our inspectors, rank and file,’’ he said.

The News Agency of Nigeria  (NAN) reports that the seven-man board is chaired by the IGP.

NAN also recalls that the IGP, on June 4, mandated the Police Works Department to build 6,000 units of modern houses for the rank and file personnel.

Five hundred units of the houses are to be located in each of the 12 police zonal commands across the nation.