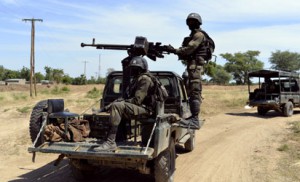 Two soldiers of the Multinational Joint Task Force (MNJTF), were, last Thursday killed in an explosion while fighting Boko Haram insurgents in the northern part of Borno State near the Cameroon border, an official said yesterday.

The soldiers, according to Muhammed Dole,  spokesperson of the MNJTF, were returning to their base at the end of the day’s operation when their truck ran into a landmine which killed a ranked officer and a private soldier. Six other soldiers sustained serious injuries and were evacuated to a military hospital in Niamey, Niger Republic for medical treatment. Col. Dole said despite the setback and unfriendly weather conditions, the troops air component was able to clear 12 camps and gunned down four insurgents on Friday.  Two insurgents were also arrested at Tumoua village, Dole said.

The MNJTF, which consists of military personnel from Cameroon, Chad, Niger and Nigeria has recently been tasked to secure the border areas shared by the countries.

The Force is also to clear the remnants of Boko Haram insurgents especially those fleeing the Sambisa forests into those areas, under the special operation tagged Gama Aiki.  At the home front, soldiers of the 33 Brigade last Friday, raided suspected kidnappers’ den in Lame Bura forest of Bauchi State where seven of the criminals were killed in a shootout.

Army spokesman, Col. Sani Usman said troops have cleared most parts of the forest.
“The troops are still combing the general area to further track down other fleeing members of the criminal gang,” he said. He added that as a result of the successes recorded “2 Forward Operation Bases (FOBs) were established at Lame and Jimi to cover the Lame and Burra axis of the forest respectively,” he added.

Buratai’s home town had come under several attacks by the Boko Haram insurgents since the army chief assumed office as the Commander of MNJTF from where he was elevated to his current status in the Nigeria army.