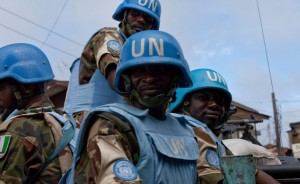 Three United Nations peacekeepers were wounded in northern Mali when a vehicle in a convoy escorting their commander and the force’s police commissioner hit a landmine on Thursday, officials said.

The incident is the latest sign of a flare up in northern Mali, where U.N. troops trying to broker peace between separatist rebels and forces allied to the Bamako government are also coming under attack from Islamist groups operating in the zone.

A spokeswoman for the U.N. mission confirmed that Force Commander Major General Michael Lollesgaard of Denmark and the police commissioner, Awale Abdounasir from Djibouti, were in the convoy when it was hit by the blast.

Radhia Achouri said the two officers were not hurt and she did not believe they were personally targeted.

“It is yet another attack in the area. They happened to be on that road at that time,” she said, referring to the road between the town of Timbuktu and Teherdge in the desert north.

A French military intervention in early 2013 drove a mix of Islamist forces from the northern towns they occupied the year before. However, insurgents continue to harass French and U.N. troops with bombings and rocket attacks.

Months of peace talks aimed at ending a Tuareg-led separatist rebellion in the north have stalled, leaving the zone awash with gunmen and smugglers. More than 35 U.N. troops have been killed in Mali since the mission deployed in mid-2013.