You are here: Home / Africa / Blast kills at least 5 in Nigeria market 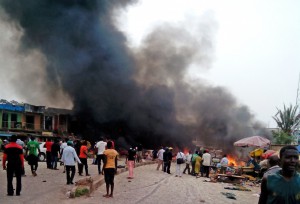 At least five people were killed by a bomb in Gamboru market in Nigeria’s northeastern city of Maiduguri on Friday morning, a policeman and a rescue worker said.

Maiduguri, the capital of Borno state, is frequently targeted by Islamist group Boko Haram. A hospital source said a dozen people were brought in with injuries as well as four bodies so far.