You are here: Home / Senza categoria / Blackwater founder Erik Prince on how to defeat Islamic State 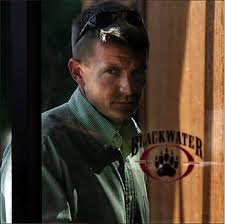 Erik Prince, the well-known founder of military contractor Blackwater, has been offering advice to current Republican presidential candidates about how the US should respond militarily and geopolitically to the situation on the ground in the Middle East — especially with regard to the threat posed by Islamic State (IS) jihadists.

Prince, who currently heads Frontier Services Group, an Africa-focused security and logistics company, outlines his talking points about what the US-led coalition must do to thwart IS in the region. A pivotal part of the effort, according to the ex-US Navy SEAL, should be focusing conventional military strikes to destroy Dabiq — an obscure Syrian village near the Turkish border that holds a mystical religious significance and serves as rallying point for ISIS recruits.

Dabiq is increasingly assuming significance amid the conflict raging in the region.

For IS, Dabiq is the village where the world will come to an end in a holy war preordained in the formative days of Islam.

Their dream fight has its origins in one of Prophet Muhammad’s sayings which mentions Dabiq as the scene of a fateful showdown between Christians and Muslims which will be the beginning of the end of the world.

Another prophecy says this final war will start after a truce between Muslims and Christians and it will be fought between puritanical Sunnis and “Persians.”

“The Hour will not be established until the Romans [Christians] land at Dabiq,” the hadith says. “Then an army from Medina of the best people on the earth at that time will leave for them … So they will fight them. Then one third of [the fighters] will flee; Allah will never forgive them. One third will be killed; they will be the best martyrs with Allah. And one third will conquer them; they will never be afflicted with sorrow. Then they will conquer Constantinople.”

Nearly 1,500 years later, waves of young recruits are coming to Dabiq like flies drawn to a lantern or fire. For them, the “Persians” represent not only Iran but also the Alawite regime of  Syria and Shia militias who have  come to defend them.

What attracts them to this village, besides its mystical religious aura, is Dabiq the glossy recruit magazine published by the IS, besides a monthly online newsletter of the same name that is widely enough read among the world’s 1.5 billion Muslims to cause a worrying stream of recruits.

It is time anti-IS forces find a way to trap and eliminate these marauders before things go out of hand.

One strategy could be positioning US Marines near Dabiq, a bait the IS may find hard to resist thereby starting the “preordained” war.

Let the small American forces be on the defensive for a few months to allow more and more IS militants to pour into the area and then annihilate them with all non-nuclear weapons available.

The final act should be the destruction of  Raqqa, the IS Caliphate capital in Syria, like the Dresden bombing in World War II.

Nothing will be more demotivating for aspirant IS recruits than a well-publicized video of the total destruction of their forces in Syria, especially Dabiq.

The act may sound gruesome but those with a medieval mind-set deserve such a pounding so others like them would not dare tread the same bloody path.

While this could be the short-term solution to end the Syrian conflict, the long-term plan is to redraw the map of the Levant.

Syrian President Bashar al-Assad has already expressed his willingness for a power-sharing deal. So it is time to undo the World War I-era Sykes-Picot agreement drafted by the French and British. That map was drawn to serve their colonial interests and the US must now help in redrawing Levant borders once and for all.

A free and independent Kurdistan is the first place to start. The Kurds could unify the northern part of existing Syria all the way to the Mediterranean Sea. Kurds are already halfway there after taking the town of Khobani in Syria.

Nineveh province could become a Christian homeland adjacent to Kurdistan providing a haven for this population.

A unified Sunni nation consisting of western Iraq and eastern Syria is another possibility.

Arming the Kurds and Sunni tribes in their own homelands would help in eliminating the surviving IS jihadis holed up there.

Lebanon has been a battered state since WWI, enduring a famine induced by the Turks that killed over 200,000 and wars, assassinations and non-stop strife.

Lebanon is effectively a rump state where the Iran-sponsored, heavily armed Hezbollah militia hold sway over an impotent government.

Let the Shia parts of Lebanon go with Assad and the Alawites living along the coast.

This redrawing of the Levant map is necessary for the Middle East. Without that, the world will be dealing with second and third order metastasis from a Caliphate growing stronger every month.

But all this is easier said than done. The ground reality is different.

ISIS is an adaptive and formidable foe. They operate smoothly from a two-member team to a 1,000-strong force to achieve the desired results. Although they have no air power, they can hit the targets with great precision.

They also have a world class communications and social media outreach that serves to promote their brand and aid in recruiting.

A recent US drone strike is the first of its kind against an IS computer hacker.  That the US government needed to take such a step is indicative of IS’ growing capabilities.

They have armored vehicles loaded with explosives and suicide drivers to deliver ordnance on call for their commanders, and prepped vehicles on call for immediate response as the tempo of combat rises.

They see exactly how the US play-book reads, have adapted to it and are largely unfazed by it. They regularly get a good supply of dedicated recruits for whom Syria has become the Super Bowl of Jihad.

The group provides new recruits with training, equipment, income and a steady supply of the spoils of war to fulfill their sickest fantasies.

ISIS leader Abu Bakr al-Baghdadi is a serious player and has taken the Al Qaeda business model to the next generation. He is an Islamic scholar who is quite adept at building an organization that governs, recruits and advances its goals.

While Al Qaeda is a dispersed terror organ, ISIS is a terror state with increasingly global reach and holds a large amount of terrain, equipment and ongoing revenue streams ranging from crude oil and kidnapping to extortion.

Their lean structure facilitates rapid decision making and limits the damage caused by an occasional US drone strike.

Despite being aware of the factors that give ISIS its strength, anti-ISIS forces are yet to get their acts together.

It is through a combination of Iran-backed Lebanese Hezbollah and Iran’s Revolutionary Guard Corps (IRGC) troops that Tehran supports President Bashar Assad directly.

Syria has served as the logistics bridge by which Iran has moved all weaponry into Lebanon over the past 35 years.

Iran’s support for Syria is also linked to Shia solidarity. The Hafez Assad Bath Party Regime took power in 1970 by force.  Assad family is Alawite, a sect of Shia Islam.

Alawites represent just 12% of the population and were long persecuted by the majority urban Sunnis.

The Sunnis, in turn, were persecuted for the past 45 years and kept in check by force.

When Hafez Assad died, his son Bashar was living in London as a dentist with his attractive wife. Reluctantly, he returned to Damascus to run the country. Later, he made several efforts in vain to improve his country’s ties with the US.

As the Arab Spring spread to Syria, the Sunnis leapt at the chance to resist.

The Alawite-dominated army backed by Soviet/Russian weapons tried to crush them. They used the conventional power of armor/artillery and carpet bombing, causing carnage and the largest refugee crisis in Europe since World War II.

In the ongoing conflict, both sides have suffered casualties. It is estimated that 1 of every 3 Alawite military-age males has been killed in the fighting.  For Syria, it is a blood feud without any chance of peaceful resolution so long as IS or other radical Sunni forces exist.

Hence, the immediate need is elimination of IS in Syria and not a regime change there. Assad cannot capitulate because if he leaves or loses, Alawites living in coastal Syria would be slaughtered en masse.

TBut te solution for Syria is inextricably linked to Iraq.

Iraq was dominated for decades by another Bath Party member, in this case, a Sunni named Saddam Hussein. His removal caused great hope for the Shia majority in the south, the persecuted Kurds in the north and wariness among the Sunnis in the middle and west of the country.

Democratic elections in the country were ill-advised as they were bought and paid for by Iran Quds Force money and intimidation throughout the Shia south especially.

The Mahdi Army and Badr Corps became the lead surrogates for Iran among the many Shia militias in Iraq. They quickly became more organized and formidable than the Viet Cong ever were in Vietnam.

They were the tool used to infiltrate and dominate the levers of power in Iraq. They effectively purged Sunnis from Baghdad and from the spectrum of security organizations.

The premature pull-out of US forces unleashed Shia extremism and caused the beleaguered Sunnis of Iraq to make the Faustian bargain to cooperate with IS who promised to protect them from Shia aggression.

When IS rolled into northern Iraq, they captured five heavy divisions of Iraqi army equipment and three major logistics bases stocked with US-made ordnance, supplied and funded by the US taxpayers.