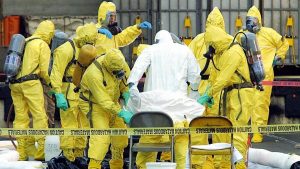 A bioterrorist attack which could wipe out 30 million people is becoming increasingly likely because it is easier than ever to create and spread deadly pathogens, Bill Gates has warned according to independent.ie

The Microsoft founder, who was speaking ahead of a speech at the Royal United Services Institute in London, warned that an outbreak of a lethal respiratory virus such as smallpox would be more dangerous than even a nuclear attack.

“Bioterrorism is a much larger risk than a pandemic,” he said.

“All these advances in biology have made it far easier for a terrorist to recreate smallpox, which is a highly fatal pathogen, where there is essentially no immunity remaining at this point.

“When you are thinking about things that could cause in excess of 10 million deaths, even something tragic like a nuclear weapons incident wouldn’t get to that level.

“So the greatest risk is from a natural epidemic or intentionally caused bioterrorism events.”

Last year the Nuffield Council of Bioethics warned that “garage scientists” could unleash dangerous genetically modified organisms into the environment using unregulated technology which is already available online. Chemistry kits which allow genetic editing can already be bought on the internet for less than €100.

Scientists are concerned that a new technique, called Crispr, is now so cheap and widely available that amateurs will start experimenting at home.

The technique works like genetic scissors to cut away DNA code and replace it with new genes. It has been hailed as one the most significant scientific breakthroughs in recent years, but there are fears that, in the wrong hands, the procedure could unleash dangerous strains of bacteria or other organisms.

Kits to make E.coli resistant to antibiotics are already for sale on the internet.

Mr Gates said that today’s widespread global travel meant that a future pandemic could be more deadly than the Spanish flu outbreak in 1918, which killed up to 100 million people.

“We will have epidemics in the next 20 years far worse than Ebola,” he said.

“Something that is human to human respiratory that is like a measles or a flu or smallpox, that you need just one person on the bus or plane or the airport and you get huge things. A health crisis somewhere is a health crisis everywhere.”

He said: “The UK’s foreign aid investments are, in fact, long-term investments in the health and security of British citizens here at home.

“A disease is more likely to become an epidemic when countries are unstable.”