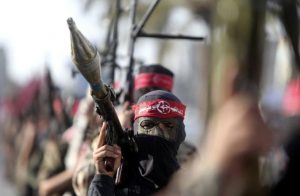 The number of members and supporters of the US and EU-designated terrorist organization the Popular Front for the Liberation of Palestine (PFLP) has dramatically increased in Germany, jpost.com can report.

According to a review of the newly released German domestic intelligence service report, the number of PFLP members rose from 100 in 2018 to 120 in 2019. The intelligence report was released on Friday and covers the period of 2019.

The report noted that there are 120 PFLP “members/supporters in Germany.” An exact breakdown of members and supporters was not outlined. It is unclear what caused the 20% increase; the document provided no explanation.

The Post has observed PFLP activity at the annual al-Quds march in Berlin that calls for the destruction of the Jewish state. The founder of the Islamic Republic of Iran. Ayatollah Ruhollah Khomeini. created the al-Quds (Jerusalem) global rally.

Writing in the Post in May, Jonathan Spyer, director of the Middle East Center for Reporting and Analysis, noted that “This growing PFLP-Iran connection is not a new revelation. It has been well reported in recent years.”

The PFLP was founded in 1967 and is animated by a Marxist-Leninist doctrine coupled with radical Arab nationalism.

The German intelligence officials wrote that the “PFLP rejects Israel’s existence” and “propagates an armed struggled” against Israel. According to the report, the terrorist group cooperates with other foreign terrorist jihadi political movements such as Hamas and Hezbollah.

The report said that the PFLP has carried out terrorist attacks resulting in victims. “And here the PFLP reveals its antisemitic character” by targeting Jewish Israelis, wrote the intelligence officials. It denies this antisemitism to the outside world.

The PFLP is not active as a terrorist group in Germany, noted the report. However, it is unclear from the report if the PFLP members and supporters use Germany as a financial pipeline to send money to the group and other terrorist entities in the Middle East.

“The supporters active here spread anti-Israel propaganda in particular and try to generate political support. The PFLP also maintains contacts with German left-wing extremism, especially with the Marxist-Leninist Party of Germany (MLPD) and the anti-imperialist spectrum,” wrote the authors.

In 2014, two PFLP members murdered four rabbis and a police officer in a Jerusalem synagogue.

While the EU and the US have labeled the PFLP a terrorist entity, Germany refuses to ban the group. The Post first reported in April that the German government issued a four-year travel ban against Khaled Barakat, a senior member of the PFLP who allegedly supports terrorism and the Boycott, Divestment and Sanctions (BDS) movement against the Jewish state.

Barakat has also provided material aid to the Lebanese terrorist movement Hezbollah. PFLP members and supporters are highly active in the German BDS campaign against Israel.