You are here: Home / FakeNews / Big data analysis of the pro-Kremlin disinformation campaign 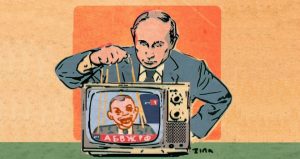 The pro-Kremlin disinformation campaign can be analysed with both qualitative and quantitative approaches. A recent study offers an entirely quantitative approach to the disinformation campaign, like reported by euvsdisinfo.eu. The MIT Technology Review commissioned big data analysis of online reporting about flight MH17, shot down over Eastern Ukraine in July 2014. As MIT Technology Review reports, “328,614,220 English-language and 58,207,194 Russian-language articles, with an average length of 3,000 characters” were compared in the study run by Czech start-up Semantic Visions. The findings are both enlightening and sad, though not exactly surprising

In the comparison between Russian language and English language reporting about MH17, Semantic Visions first established and analysed a “control case” by identifying a “politically neutral” topic about an event in Russia with international importance. The event chosen was the Winter Olympic Games in Sochi in 2014. Here, the proportion of reporting in Russian and in English was 1:5,6, ie there was 5,6 times more reporting in English than in Russian. The team then moved to look at two much more politically sensitive topics: Russia’s illegal annexation of Crimea and Russia’s invasion of Eastern Ukraine. Here the pattern didn’t change much: Both the volume and the peaks and lows of reporting on a timeline resembled the relationships observed in the reporting about the Sochi Olympic Games.

But when the team looked at MH17, the pattern changed drastically. Even though Russian state-controlled and state-loyal media actively tried to spread confusion about the downing of MH17, the analysis by Semantic Visions shows that the volume of reporting in Russian was considerably lower than one would expect on the basis of the observed patterns. “The initial Russian story was that MH17 was taken down by a Ukraine jet fighter—so you would think they would use it to support their version,” Semantic Visions told the MIT Technological Review. “It’s almost as if they were trying to downplay it.”

In addition, Semantic Visions analysed media reporting about the “humanitarian convoys” from Russia into Eastern Ukraine in the month after the downing of MH17 and noted a similar pattern of underreporting in Russian. Here, the result shows that this initiative “was not intended for the Russian public, but for a global audience in their informational war,” Semantic Visions concluded.

Semantic Visions’ research confirms what we have written about the high degree of political control over Russian media, i.e. the way in which media are subject to the Kremlin’s control by means of the “temniki” guidelines system.  The analysis of big data underscores how the dominating Russian language media can successfully downplay a case that is inconvenient to the Russian authorities, create confusion abroad and distract attention.