You are here: Home / MidEastGulf / Big danger to Hamas from the Amnesty report 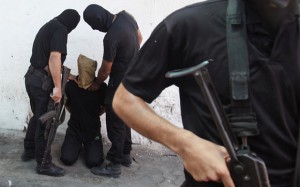 Since the end of the Israel’s offensive against the people of Gaza last summer, Hamas has spent a great deal of its energy on proving to human rights organisations and international law bodies that Israel has committed war crimes against the Palestinians. One of the most important reports supporting that view was that issued by Breaking the Silence – ex-Israeli soldiers revealing what they were ordered to do – with the title, “How We Fought in Gaza”.

However, on 27 May, Amnesty International released a report which claimed, “Hamas is accused of executing individuals who it believes were cooperating with Israel in the 2014 offensive.” Hamas expressed its shock at the content of the report and its disappointment at being equated with Israel.

Several days after the Amnesty report was issued, it had become apparent that the turn of events had taken Hamas by surprise, especially on the diplomatic and legal levels. Amnesty international enjoys a great deal of credibility around the world and it is for this reason that Hamas fears its condemnation, although it may not admit so publically.

The Amnesty report follows the execution of 23 Palestinians who were accused of spying for Israeli intelligence in Gaza. The arrests and executions were part of a campaign called “Khanq Al-Ruqab”, which was launched in July and August 2014 during Israel’s war on Gaza.

Hamas did not wait long before responding to Amnesty International; it rejected the report as a politicised document lacking in professional standards and based upon false allegations requiring further clarification if they are to be considered credible at all. The Islamic movement not only denied that it executed Palestinians who were accused of spying during the 2014 Gaza war, but also went a step further by accusing Amnesty of issuing a report containing allegations that contradicted reality.

Another aspect that occupies Hamas’s internal debates about the Amnesty report centres on the movement’s fear that Israel will take advantage of this opportunity and use it as a justification for filing a suit against the movement in the International Criminal Court (ICC). Such a move could result in the need for a change in the leadership, as the current leaders could be placed on Interpol’s wanted list; it would be Hamas’s worst nightmare.

Hamas added further that it did not fear the ICC, even if the Amnesty report were to be presented as evidence against it in judicial forums.

This air of confidence that Hamas has adopted in the wake of the Amnesty report coincides with the movement’s effort to obtain its full and original text in order to refute its content. The report could harm Palestine’s position seriously as it heads to the ICC. This requires Hamas to take practical steps to deal with the expected fallout from the Amnesty document.

Hamas knows well that the ICC will take a long time to verify what Amnesty has said, and that subsequent suits against the leaders of the movement would not be an easy task, because it requires it to obtain secret documents that might confirm their direct responsibility for the executions. These documents are not contained within the report.