You are here: Home / Mediterranean / Between the Islamic State and al-Qaeda in Tunisia 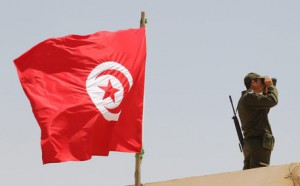 Over the past month, there are increasing signs that The Islamic State (IS) intends to build a base and set up a new wilayah (province) in Tunisia in the near future named Wilayat Ifriqiya, a medieval name for the region of Tunisia (as well as northwest Libya and northeast Algeria). This would challenge al-Qaeda in the Islamic Maghrib’s (AQIM) Tunisian branch Katibat ‘Uqba ibn Nafi’s (KUIN) monopoly on insurgency and terrorism since their campaign in Jebel Chambi began in December 2012, opening another front in the broader AQ-IS war. As a consequence, outbidding between these two adversaries could lead to an escalation in violence, with Bardo National Museum style attacks becoming more common.

THE ISLAMIC STATE SIGNALING IN TUNISIA

In mid-December last year, IS directed its first overt message to the Tunisian state and its people. Aboubaker el-Hakim (who went by Abu al-Muqatil in the video) claimed responsibility for the assassination of Tunisia’s secular leftist politicians in 2013 — “Yes, tyrants, we’re the ones who killed Chokri Belaid and Mohamed Brahmi” — thus confirming the Ennahda-led government’s suspicions that he was involved. Beyond calling for more violence and for Tunisians to remember its imprisoned brothers and sisters, he also called upon the Tunisian people to pledge bay’a to Abu Bakr al-Baghdadi, to raise the banner of tawhid (pure monotheism) and to rip down the flags of Charles de Gaulle and Napoleon (alluding to the historically close relations between Tunisia and France).

This was followed on April 7th by Abu Yahya al-Tunisi of IS’s Wilayat Tarabulus in Libya, who urged Tunisians to travel to Libya for training in order to establish and extend the writ of IS back at home. Only two days later, a new media account, Ajnad al-Khilafah bi-Ifriqiya (Soldiers of the Caliphate in Ifriqiya) Media Foundation, was created. While unofficial, it foreshadowed the targeting of Tunisia in much the same way the establishment of al-‘Urwah al-Wuthqa (The Indissoluble Link) Media foreshadowed the pledge of bay’a given by Boko Haram to IS in March 2015.

Although KUIN was first identified as a Tunisian cut-out for AQIM in December 2012 by then Tunisian Interior Minister Ali Larayedh, it was not until mid-January 2015 that the battalion publicly acknowledged the association. This pledge was reaffirmed by KUIN following the death of its leader Khalid Shaaib (Abu Sakhr Lukman) in late March and was an attempt to consolidate strength following false rumours that the KUIN might switch sides to IS. These rumors emanated in part from a statement by KUIN showing support for IS though there was no indication of bay’a. The need to distinguish between general support and a religiously-binding pledge of allegiance is vital — AQAP released a statement in support of IS in Iraq after the fall of Mosul last year.

KUIN has also identified with Ansar al-Sharia in Tunisia (AST) when announcing martyrs, highlighting how some of its fighters are former members. AST has become largely defunct however, with members either being arrested, going abroad to fight and train in Syria and Libya, or joining up with KUIN followings its designation by the Tunisian government as a terrorist organization in late August 2013.

Since it first entered the public gaze, KUIN has remained obscure, maintaining a low-level insurgency with the Tunisian military for 2.5 years in Jebel Chambi. Members have also been arrested for attempted attacks in different cities of Tunisia as well as for weapons smuggling. More recently it has increased its online profile, at first through the Fajr al-Qayrawan Facebook and Twitter account and then Ifriqiya Media, a well-known non-partisan aggregator of online jihadi releases from all African-based jihadi organizations. Only this past weekend, KUIN created an official media outlet for itself called al-Fatih (the conqueror). Up until then, the main content it released showed pictures of its fighters, martyrs, training camps, graphics with quotes from the Qur’an and ghana’im (spoils of war) from its past operation in Hanchir Ettala.

While KUIN has been involved in a low-level insurgency for 2.5 years, it has not altered the status quo in Tunisia. Therefore, if IS attempts a full-scale terrorist or insurgent campaign in Tunisia, pressure on KUIN could mount and an outbidding scenario of escalating violence could ensue. It could also put more pressure on the Tunisian state, which has up to now been able to maintain control against jihadis since the revolution. That said it is possible one or both organizations might attempt a large-scale attack that would gain a huge media audience, given the onset of tourist season. Moreover, in the aftermath of the Bardo National Museum attack, supporters of IS flipped the popular meme #IWillComeToTunisiaThisSummer in support of the Tunisian tourism industry on its head by showing off with bullets and weapons, intimating that they too would be coming to Tunisia this summer. Vigilance from both the state and the public, then, will be vital in maintaining order and diminishing the effects of violence.