You are here: Home / Europe / Berlin and Paris push for EU security reforms 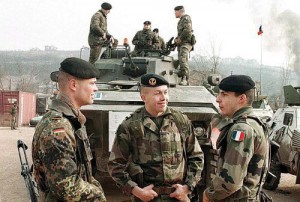 The German and French defense ministers have launched a joint proposal ahead of Friday’s summit of EU leaders (minus Britain) to overhaul common foreign and security policies.

Commission President Jean-Claude Juncker is expected to echo calls for enhanced cooperation in these areas during his annual speech to the European Parliament on Wednesday, reflecting a view that the U.K.’s vote to leave the EU should make it easier to achieve this goal.

“The time has come to deepen our cooperation,” read the paper by French Defense Minister Jean-Yves Le Drian and his German counterpart Ursula von der Leyen. POLITICO obtained a copy of the six-page document which has been prepared for this week’s summit in Bratislava.

The proposal avoided any reference to the idea of a “European army,” but call for innovations such as a joint EU military headquarters, more cooperation with NATO, and a push for more cross-border military planning. It included an offer from Germany and France to share their satellite surveillance capabilities with “relevant EU institutions,” such as the border agency Frontex.

In an effort to get other countries on board, the two countries proposed incentives for member countries to increase their defense budgets, and want the European Commission to look into options “including fiscal measures” — such as excluding defense spending from budget deficit calculations.

The authors stressed that such plans should be inclusive and “open to all member states,” using as a legal basis a so far unused EU treaty provision that refers to long-term commitments under “permanent structured cooperation.”

“Once agreed, clear goals and standards would create a binding commitment,” said the new Franco-German paper.