You are here: Home / Europe / Berlin: 790 people have joined Islamic State in Iraq and Syria from Germany 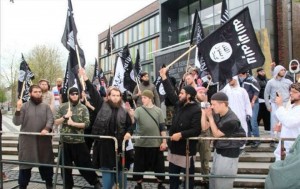 Germany’s domestic intelligence agency says the number of Islamic extremists heading to Syria and Iraq continues to grow, raising concerns over trained fighters returning who could carry out attacks in Europe.

The agency said Wednesday its latest evidence shows 790 people so far have made the trip from Germany to link up with militant groups in the Mideast, up from 750 in October, and about one-third had returned.

Germany so far has been spared mass-casualty attacks by Islamic extremists such as the Nov. 13 Paris attacks but security officials say it is also a target.

All but two of the Paris attackers were from Belgium or France and French authorities maintain the attacks were planned in Syria.

CBS News reported earlier this week that, according to the latest figures, more foreign fighters have gone from Belgium to join jihadist groups in Syria and Iraq, per capita, than any other European nation.

According to the International Centre for the Study of Radicalization and Political Violence (ICSR), 440 people have gone to join the fight from Belgium, and an estimated 130 of them have come back home.