You are here: Home / Europe / Belgium to reduce military presence on its streets 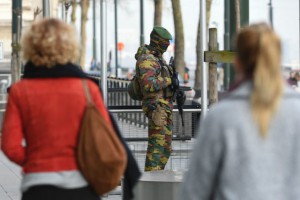 The Belgian government will reduce the number of military troops deployed around the country by about a third, Belgian weekly Le Vif reported Friday.

Along with federal police, soldiers have been on foot patrols in Brussels and elsewhere as part of the operation “Vigilant Guardian,” launched in the wake of the Paris attacks of January 2015 and the dismantling of the Verviers terror cell. The number will be brought down to 1,250 from 1,808, according to Le Vif.

The measure is expected to take effect in early December.

The defense ministry also announced it planned to boost the surveillance capabilities of mobile patrol units to make a “stronger surprise effect” in raids and other security operations.

Belgium’s terrorist attack alert has been at level three (out of four) since the March 22 bombings in Brussels in which 32 people were killed.