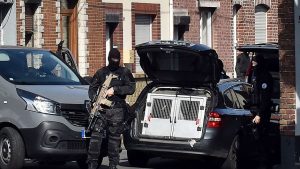 Belgian prosecutors said they were looking for further suspects in an emerging terror investigation and that they feared a possible attack, like reported by wort.lu.

He, adding, “We fear they may feel cornered. We therefore fear there could be the same reaction as on March 22 (2016),” said.

Van der Sypt was referring to twin attacks by suicide bombers in Brussels on March 22 2016, killing 32 people, that occurred after police came across a weapons cache.

On Wednesday, police charged two brothers of a convicted jihadist with belonging to a “terrorist group,” suspected of planning an attack with a large stash of weapons including Kalashnikov rifles.

The pair, named as Akim and Khalid Saouti, were among four people detained in the Brussels suburb of Anderlecht, two of whom were later released.

A fifth man was arrested across the border in northern France, near the city of Lille.

A source close to the probe said the two men in custody are brothers of Said Saouti, a member of the Kamikaze Bikers club who was jailed for six years in 2016 for recruiting people to jihadist organisations and supporting the Islamic State (IS) group on social media.