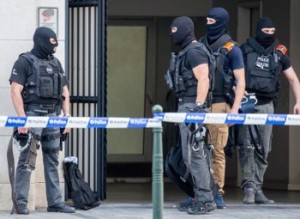 The Belgian federal prosecutor’s office says authorities have detained two people for questioning following anti-terror raids in two districts of the capital Brussels and the city of Liege in the southeast.

Police searched two homes in Haren and Schaarbeek districts of Brussels and another in Liege in the French-speaking Wallonia region, the office said in a statement.

According the statement, the two detainees “will be interrogated by the investigators” and a judge will decide later whether expanded detention is needed.

A judge specializing in terrorism cases ordered the raids “in connection with an ongoing federal investigation into the activities of a terrorist group,” the office said, without providing further details.

According to Belgium’s RTBF television network, the two are a 28-year-old man and his female companion.

The television station added that the man, who was engaged in criminal but not terrorist activities, had been active in a chat group on the encrypted messaging app Telegram, where he “apparently indicated he was preparing to carry out an attack.”

The RTBF did not name its sources but said authorities sought to determine whether the man was linked to the recently detained users of Telegram in France.