You are here: Home / Analysis / Belgium is Europe’s capital of terrorism 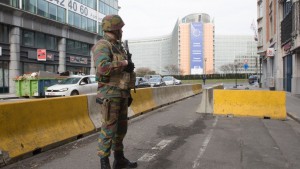 Explosions that rocked the Brussels Zaventem airport and a metro station in the city on Tuesday morning were “terrorist attacks,” Belgium’s federal prosecutor has said. At least 28 people were killed in the airport and Maalbeek metro station blasts, the Associated Press reported.

The prosecutor said a suicide bomber was “probably” behind one of the attacks.

Here’s why that may not be surprising: Belgium, home of the EU parliament, has become Western’s Europe’s capital of terrorism. Belgium supplied the most foreign fighters to Sunni militant organizations per capita of any Western European country in 2014, according to data compiled by the International Center for the Study of Radicalization and Political Violence.

In fact, the nation bordering northern France supplied 40 fighters per one million people last year, far exceeding any other nation in Western Europe. It also supplied more fighters per capita than France, the UK and Germany, which produced the highest number of fighters to militant groups.

Just four days ago, Salah Abdeslam—a suspect in last November’s devastating and deadly Paris attacks—was captured in Molenbeek, a Brussels suburb. In total, six of the assailants involved in those attacks were born in, or had been living in, Belgium.

According to ICSR’s latest estimate, from January 2015, the total number of foreign fighters to have joined such groups exceeds 20,000, of which nearly a fifth were residents or nationals of western European nations.

It is unclear who carried out Tuesday’s attacks, but ISIS loyalists celebrated them online in the immediate aftermath.