You are here: Home / Europe / Belgium investigates funding to Palestinian NGOs with links to terrorist group 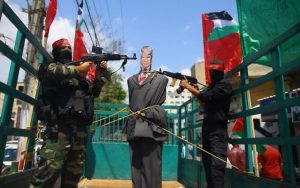 Belgium’s Minister of Development Meryame Kitir (pictured), has told a Committee of the Belgian federal parliament that an investigation is underway into whether Belgian development aid may have been used to finance terrorist activities of the Popular Front for the Liberation of Palestine (PFLP), ike reported by eureporter.co.

Belgian MP Kathleen Depoorter, from the opposition N-VA party, asked Kitir, during a session of the external relations committee this week about the allegations concerning humanitarian funds being diverted to terror groups. She told the committee that a number of NGOs were alleged to have “regularly received funding from Western Europe, while operating at least in part as a cover for activities of the Popular Front”.

Belgium’s Directorate-General for Development Cooperation does not fund Palestinian NGOs directly, but rather via Belgian NGOs as third parties. One of the aims of this state funding was to “mitigate the influence of pro-Israel voices” and was approved in 2016 by then Belgian Minister of Development Cooperation (and now Prime Minister) Alexander De Croo.

Minister Kitir told the committee that in the past five years 6 million Euro was given to Belgian NGOs active in Palestinian territories, including Broederlijk Delen, Oxfam Solidarity, Viva Salud and Solidarité Socialiste (SolSoc), which are all politicised anti-Israeli NGOs who have partnered with Palestinian NGOs linked to the terrorist PFLP.

The Minister said the four Palestinian NGOs with active links to Belgium are:

1 HWC, a partner of the Belgian NGO Viva Salud

2 Bisan, a partner of Viva Salud

4 Union of Agricultural Work Committees (UAWC), a partner of Oxfam through humanitarian funding.

The Minister explained that over the past five years €660,000 were donated through Viva Salud, €1.8 million went via Oxfam and €1.3m through Broederlijk Delen and that an investigation into the use of this money is now under way.

“I take these allegations very seriously. It goes without saying that under no circumstances can development cooperation funds be used for terrorist purposes or to encourage violent behaviour,” she said.

Belgium’s investigation comes as a result of reports sent to the Belgian government by the Israeli government and reports by NGO Monitor which highlighted the close links between several Palestinian NGOs and the PFLP, which is designated by the EU as a terrorist organisation.

UK Lawyers for Israel (UKLFI) also wrote to Kitir and to the Directorate-General for Development Cooperation and Humanitarian Aid in Jerusalem about one of the NGOs in question.

Belgian Friends of Israel (BFOI) has also briefed several Belgian MPs and alerted them to the situation, as well as running a Twitter campaign, calling out Kitir for continuing to fund the NGOs linked to terrorism.

MP Kathleen Depoorter pointed out that the reports of links between the Palestinian NGOs and the terrorist organization caused quite a stir in the government in the Netherlands and payments have now been suspended.

“I have asked the minister to inspect these reports and that she also submit her own investigation into the abuse to parliament. Everyone is innocent until proven otherwise and these Palestinian organizations deserve a fair chance, but we expect appropriate action if the facts are proven,’’ said Depoorter.

‘’I am pleased that the matter is being investigated, but I also expect quick answers and appropriate steps from the minister,” she added.

UKLFI was instrumental in campaigning for the Dutch government to suspend payments to the Union of Agricultural Work Committees (UAWC), a Palestinian NGO representing farmers, particularly after several of its top officers were indicted for and are now on trial for their participation in a PFLP terrorist attack which killed Rina Shnerb, a 17-year-old Israeli girl in August 2019.