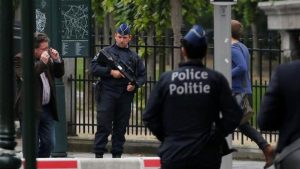 A gunman has killed two police officers and a passerby before being shot dead in the centre of the Belgian city of Liège, public broadcaster RTBF has said.

La Libre Belgique newspaper quoted a police source as saying the gunman shouted Allahu Akbar – “God is greatest” in Arabic – and had taken a woman hostage at some point in the attack.

The national anti-terrorist crisis centre, which interior minister Jan Jambon said was monitoring the situation, said terrorism could not be excluded as a motive though it was also looking into other possible reasons. “It is one of the questions on the table, but for the moment all scenarios are open,” a spokesman for the crisis centre said.

Images on social media showed people scurrying for safety on Liège’s central Boulevard d’Avroy, with shots and sirens being heard in the background.

Liège, an industrial city close to the German border in a French-speaking region, was the scene of a shooting in 2011, when a gunman killed four people and wounded more than 100 others before turning the gun on himself.

Belgium has been on high alert since a Brussels-based Islamic State cell was involved in attacks on Paris in 2015 that killed 130 people and Brussels in 2016 in which 32 died.