You are here: Home / Africa / Belgian citizens leave Burundi amid upsurge in violence 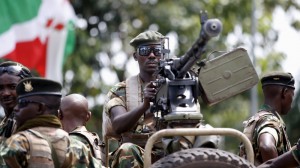 People are leaving Burundi, amid an upsurge in violence there – with some touching down at Brussels airport.

It comes after Belgium, Burundi’s former colonial power, advised all of its citizens to leave the East African country.

“It’s really an atmosphere of insecurity, very uncertain. You can’t plan an activity, you never know whether you can move around or not, so it’s really difficult,” said Clemence, one of those arriving in Brussels.

The violence has pushed Burundi close to civil war.

It was sparked in April when President Pierre Nkurunziza announced plans for a third term in office. Protests and a failed military coup followed.

Almost 90 people were killed in recent attacks on military sites.

The Africa Union says its preparing to send in thousands of peacekeepers. But the government has reportedly said that it will not allow any foreign troops across its borders.

Uganda is planning to resume the mediation of peace talks later this month.