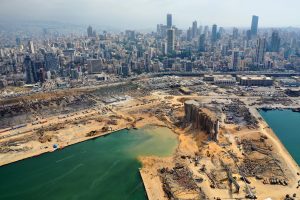 France stated yesterday that “enough objective elements” indicated that the double explosion, which ravaged the port of Beirut on Tuesday was of accidental origin. Many questions remain nonetheless over Tuesday’s massive blast, killing at least 158 people and wounding 6,000 others, like reported by alarabiya.net.

Here, six sources – a former spy, a Lebanese military official, a freight forwarder in the shipping industry, a lawyer, a source close to Hezbollah commanders and a former high security source share their analysis on the tragic incident.

Two sources told Al Arabiya English that the ammonium nitrate was being slowly siphoned off by Hezbollah for military purposes. The Lebanese party has widely upgraded its missile collection after 2006 and equipped them with smart guided heads, with ranges varying from 10km to 500 km.

1 – Why was the ammonium nitrate kept in the port?

A Lebanese army source underlined that an important question was why Lebanese officials had ignored port authorities repeated warnings about the presence of the deadly material. According to documents obtained by Al Arabiya English, at least two Directors of Lebanese Customs – Badri Daher and Chafic Merhi – warned repeatedly for years of the “extreme danger” of leaving the ammonium nitrate at the port.

“Urgent Matters Judges and governments officials all heeded the warnings for over seven years. Who benefited from keeping a highly explosive device remaining into Lebanese custody?” said the military source.

According to a list presented to Al Arabiya English, at least four judges overviewing urgent matters from 2014 to 2020 were requested to transfer the dangerous shipment to a local company.

Judge Zalfa Hassan, Jad Maalouf and Hala Naja, are among the names of Urgent Matters Judges who presided between 2014 and 2020, according a legal source who spoke on condition of anonymity with Al Arabiya English. Over twenty people have been so far arrested in the course of the investigation.

Additionally both President Aoun and PM Hassan Diab also admitted having knowledge of the deadly nitrate.

2 – Was Hezbollah involved in storing the ammonium nitrate?

A former high security source who spoke to Al Arabiya English on condition of anonymity said that the ammonium nitrate remained for so long at the port “as it was being siphoned off for military purposes by a third party.”

A statement that was also later confirmed by a source close to Hezbollah commanders who specified that the product was being used for missiles and rockets war heads, which were sent by Iran to Lebanon and assembled locally in the Hermel Region by Hezbollah. Back in 2017, the French Intelligence Online magazine had already reported that Hezbollah was constructing two underground facilities in Lebanon for manufacturing missiles.

“Lebanese security services also received American warnings from US envoy David Satterfield about the existence of two missile assembly plants, in South Lebanon and the Bekaa,” added the high security source, who explained that weapon shipments were transferred on regular basis into Lebanon via the port as well as over thhe country’s land borders.

Israel has systematically targeted Tehran’s shipments to Hezbollah transferred into Lebanon via Syria, striking the Lebanese party hundreds of times across the border.

3 – Where did the ammonium nitrate come from?

Prime Minister Hassan Diab said that about 2,750 metric tons of ammonium nitrate, a highly explosive material had been stored at the port for the past six years and exploded.

The ammonium nitrate came to Beirut on a Georgian ship in 2013, and was originally destined to an explosives maker, Fabrica de Explosivos in Mozambique, before facing technical and legal problems.

An online Mozambican website reported nonetheless that the Beira port had never been notified of the ship existence or its cargo, estimated at around $1.5 million.

4 – Was the blast ignited by fireworks?

The explosion that wreaked havoc across Beirut on Tuesday was triggered by an initial explosion dovetailed by a fire, followed by a series of smaller blasts. The Lebanese army reported at the time that fireworks were set alight by a welding job on the warehouse’s door.

Former CIA officer Robert Baer told Al Arabiya English that from the footage he had seen so far, it made no sense that fireworks had caused the disaster and that the orange ball of fire that shot through the explosion, indicated there had been use of some sort of propellant that triggered the ammonium nitrate detonation.

A forwarder – an agent who facilitates the movement of goods to their destination who spoke to Al Arabiya English on condition of anonymity – said it was unlikely that fireworks could have caused the blast, as they were not generally stored at the port, for obvious security reasons.

“The procedure for firework importation is that merchandise is processed before the ship unloads, due to the danger it poses,” he said.

A military official who also spoke to Al Arabiya English on condition of anonymity confirmed this that fireworks are processed out of the port upon arrival.

According to the forwarder, Hangar 12, where the ammonium nitrate was stored, was not accessible to most of the port’s employees.

5 – Did something else ignite the ammonium nitrate?

According to Baer, accidents involving ammonium nitrate are rare, as the ingredient is its pure form is generally quite stable.

“There’s never been an incident of ammonium nitrate stored in the open spontaneously detonating. It will burn vigorously but not detonate,” he said.

Because ammonium nitrate is hydroscopic and can be used with water, it would take an extraordinary set of circumstances to cork it off, added Baer.

“The bags of ammonium nitrate would have had to be exactly arranged to contain enough pressure to detonate,” he explained.

6 – Which security apparatus had oversight of the port?

“Certain sections of the Port and the airport are used for smuggling military shipments to Hezbollah,” a source close to Hezbollah fighters told Al Arabiya English on condition of anonymity. The former security source pointing out that terminal 5 was a transit point for the party in the Beirut port. The port remains also a lucrative business for all of Lebanon’s corrupt elite.

Yet, many continue to speculate about the incident given its murky circumstances.

For Bauer, if the port was being used to store weapons, military ammunition in the vicinity of the ammonium nitrate could explain the explosion, as it would have acted as a booster to the blast.

With no trust in their officials, Lebanese are asking for an international investigation that could answer all their questions, but the outbreak of bloody protests in the days that followed suggests that the Lebanese will not be satisfied with less than the truth this time.