You are here: Home / Analysis / Beirut clash: Hezbollah a victim of its own ‘resistance’ success 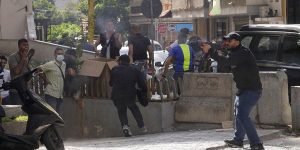 Gunfire targeted Hezbollah members who were taking part in a protest that was designed to prevent an investigation into the Beirut port disaster last year, like reported by jpost.com. Hezbollah’s goal was to cement its control of Lebanon, where it already has been able to secure allies in the presidency and to create a parallel communications network and infiltrate other state structures.

Hezbollah’s goal, 16 years after it murdered the former prime minister of Lebanon Rafic Hariri in its first bid for control of the country, was to flex its muscles and get judge Tarek Bitar removed. It appears that the gunman had other plans for today.

Hezbollah is now a victim of its own success. What was once a “resistance” movement that was popular among a segment of the historically marginalized Shi’ite population has come to dominate Lebanon. This isn’t because Hezbollah is so large, it has only a few seats in parliament. Hezbollah instead has incredible mafia-like success because it maintains its own para-state militia, its own phone network, financial system, it arranges import of fuel and has sent fighters abroad to wage war and conduct Lebanon’s foreign policy.

Hezbollah is so powerful and global that it is stronger than the state. As such, it occupies Lebanon, using classic Iranian tactics for building up parallel institutions, bankrupting the state and turning the state into an appendage of the Hezbollah militia terrorist movement.

But Hezbollah is also a victim of this “success.” This is because if you are too powerful then you become the target of “resistance.” It is no longer in Hezbollah’s interest to have destabilization and chaos in Lebanon because now it is part of the state structure. This means that while Hezbollah wants to parasite off the state and bankrupt it, it also doesn’t want the kind of factionalism that dominated Lebanon during the civil war period from 1975 to 1989. This is because Hezbollah, now that it is close to power, wants to have a monopoly on that power. That means it doesn’t want other militias in the country.

The gunmen who shot at Hezbollah and its Shi’ite allies among the Amal movement, seem to be resisting Hezbollah’s machinations. This isn’t the first time these kinds of clashes have happened. Back in 2008, Hezbollah defeated opponents in armed street battles and clashes so that Hezbollah could maintain its parallel communications network.

Each time a state structure has tried to challenge Hezbollah’s power and impunity the organization takes advantage of the crises. This time the judge had issued warrants for officials linked to Amal. Hezbollah couldn’t allow that. In the past Hezbollah has made sure that no warrants were issued for its members in the wake of the murder of Hariri. It assassinated writers, commentators, politicians, experts and officials.

Hezbollah members appeared to have brought arms to the protest as well, perhaps prepared in advance for this eventuality. Lebanon also has an army that has been deployed. By late afternoon reports said five or six people had been killed.

This incident appears similar to another incident in August when Hezbollah mourners also came under fire. Several Hezbollah members were killed in the clashes. Those clashes were apparently between Hezbollah and a local Sunni tribe. Here again, Hezbollah was a victim of its own power because instead of it being the lawless group it was being targeted by an armed group.

Although the army deployed in Beirut in the wake of the clashes the reports from the ground showed random shooting and even RPGs being fired at buildings. Both Hezbollah and Amal members were armed. This shows how Lebanon is a powderkeg and many small arms are held by people in the country. Many Hezbollah gunmen appeared to be mobilized in Beirut according to videos. Members of parliament called for the army to be deployed to stop the “militia” violence.

But it still remained unclear who had started the violence. In the end, although it shows that Hezbollah has enemies that are willing to take potshots at it, the groups overall drive for power in Lebanon is almost complete. It has bankrupted the country. It killed a former prime minister. It has a parallel communications network. It has a huge arsenal of missiles, drones and other weapons. It has killed critics such as Lokman Slim. It likely killed author Samir Kassir as well as Pierre Amine Gemayel, George Hawi, and Wissam Eid, the investigator of the 2005 killing of Hariri. Now Hezbollah sought to remove a judge investigating last year’s Beirut explosion.

The violence on October 14 will be another small turning point in Lebanon’s descent into complete control by Hezbollah.