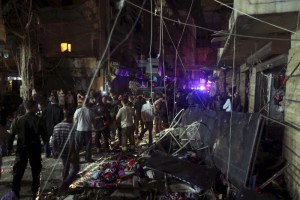 Expect more bombings like yesterday’s twin blasts in Lebanon — and last month’s suspected bombing of a Russian airliner in Egypt — if Islamic State (IS) militants continue to suffer setbacks on the battlefield in Syria and Iraq, warn Middle East analysts.

Experts said the bombing of a Shi’ite suburb in Beirut on Thursday was one way for IS to propagate the message it is still a rising force across the region.

“They want to boost their brand and show their presence,” said Greg Barton, Professor of global Islamic politics at Deakin University in Victoria.

“It may be losing territory to the Kurds in the north of Syria and indeed in the north of Iraq around Sinjar, but it is able to make the claim that it is still a rising power.”

At least 41 people were killed and more than 180 were wounded as two suicide bombers blew up a stronghold of Lebanon’s Shiite Hezbollah movement in Burj al-Barajneh in Beirut’s south.

A suspected third bomber’s vest failed to detonate. It is the deadliest attack in Lebanon since the 15 year civil war ended in 1990.

IS claimed responsibility for the attacks in a statement posted online which said “Soldiers of the Caliphate” detonated explosives planted on a motorbike in an area frequented by Shiites.

The victims included women and the elderly.

Professor Barton said IS has a lot to gain from waging attacks like the one in Beirut or others in Tunisia or the downing of a passenger jet in the Sinai, if indeed it is proven the plane was brought down by a bomb.

“What we have to assume is that as IS comes under pressure, as its back is against the wall, it’s going to push back and look for areas where there is some other weakness that it can expand into,” he said.

“IS will look for other opportunities to try and redeem its reputation, the more it comes under Syria’s forces.”

The bombing in Beirut comes as IS militants lose further ground in the fight against Kurdish forces in Iraq and Syria.

Kurdish Peshmerga forces — backed by US-led airstrikes — have launched a new offensive to retake the northern Iraqi city of Sinjar — a strategic supply link between two key IS held cities of Mosul and Raqqa.

Further south, Iraqi security forces are on the verge of retaking Ramadi, the capital of Anbar Province.

Sydney based security analyst David Wells, who has worked for both Australian and British intelligence agencies, agrees the Beirut bombing is a projection of power at a time where IS is not as successful in Syria or Iraq as it has been.

“They are under increasing pressure from a number of different sides, and I think demonstrating this power in a major attack in a neighbouring city … it’s a demonstration of power and projection of that success that is so key to their narrative,” Mr Wells said.

“One of the key things we’ve learnt from ISIS is their ability to dominate the media agenda and to project that image of success and progress.

“And I think up until a few months ago they were able to do that with activities in Syria, Iraq, on the battlefield. But increasingly they’re not making the progress that they were.

“They are losing control of certain areas so their ability to demonstrate their reach and say ‘ok we’re not doing so great in Iraq and Syria but we’re able to carry out major attacks elsewhere in the region’… that narrative of success and power and fear I think, is achieved through these sort of attacks.”

Lebanon will not be tipped over the edge by IS

Professor Barton said there are other mixed motivations for the Beirut attack, including IS’s “visceral hatred” of the Shiite group Hezbollah, which sent fighters into Syria two years ago to back Syrian president Bashar al Assad’s forces.

But he said IS was also trying to drive a wedge into the sectarian “fracture lines” in Lebanese society, in an attempt to draw Lebanon into the broader conflict in Syria and thereby expand its domain.

“It doesn’t mean they’re going to have any chance of taking control of Lebanon but they want to boost their brand and show their presence,” he said.

“This is roughly the 12th attack in Lebanon in two years.

“So far none of these attacks has managed to push Lebanon into the chaos of sectarian conflict in Syria.

“And that’s partly because the people of Lebanon are so experienced with sectarian conflict that more than any other people across the region they’re sceptical of religious fundamentalism and being goaded into sectarian conflict.

“I don’t think this one attack is going to tip things over the edge. But 10-12 attacks in the last two years and we see more attacks of this scale … then I don’t think we can take anything for granted.

“It doesn’t mean that Lebanon is going to fall apart overnight. But it can be slowly drawn into another wave of open sectarian fighting inside Lebanon itself. That’s a scary thing to think about.”

‘Armies in Syria and Iraq not necessarily coordinated’

So far the Lebanese people have managed to avoid being drawn into the wider conflict.

Professor Barton said talks in Vienna this weekend — involving the US, Russia and other stakeholders, including Iran — may yet see the beginning of a breakthrough towards ending the civil war in Syria, which could lead to Syrian ground forces taking on IS in a more concerted fashion.

But Mr Wells said it was too early to talk about the end of IS.

“I think to target IS successfully we need a really unified front and you know, there’s a lot of different armies and a lot of different groups in Syria and Iraq operating but they’re not necessarily being coordinated in an effective way,” he said.

“So I think whilst the opposition to IS are divided and have different priorities it’s going to be really hard to fully dislodge them, but certainly the momentum has been checked.”