You are here: Home / Africa / Behind the Numbers: Understanding Boko Haram’s Reign of Terror in Nigeria 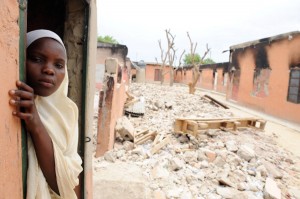 “They used to train girls how to shoot guns. I was among the girls trained to shoot. I was also trained how to use bombs and how to attack a village. They’ll dress us and demonstrate to us how to explode a bomb. This training went on for 3 weeks after we arrived. Then they started sending some of us to operations. I went on one operation to my own village.” –Aisha (age 19)

Imagine waking up one morning, preparing for a friend’s wedding just before you are kidnapped, forced into “marriage” with one of your abductors and held captive in a remote camp hundreds of miles from home.

In these camps you witness brutal executions, are required to convert to an unfamiliar religion, and threatened into killing on behalf of an atrocious armed militant group. Sexual violence is an everyday occurrence.

What might sound like a fictitious Hollywood plot to some is all too real for others. This is the story of Aisha, whose real name will be withheld for security reasons. Aisha is one of the estimated 2000 girls who have been abducted by Boko Haram and one of the few who have escaped.

One year ago, the world was left in shock after the abduction of 276 girls from to town of Chibok, Nigeria. Unfortunately, the horror of these abductions is just one aspect of an insurgency that has been devastating Nigerian communities long before the story of the 276 Chibok girls became international news last year and continuing after the abductions occurred.

Boko Haram militarized in 2009 and has been gradually claiming territory in the northeastern regions of Nigeria. Starting in 2014 and into 2015, the scale and quantity of the group’s attacks skyrocketed, resulting in the deaths of at least an estimated 5,500 civilians. Amnesty has documented several of these attacks, including the raid of Baga town on January 3rd,2015 when 2,000 people were killed and the attack on Bama in March where an estimated 5900 people were killed.

In March the Nigerian people made history by sweeping out incumbent President Goodluck Jonathan and electing former head of State Muhammadu Buhari, who vowed to crush Boko Haram. The Jonathan administration was widely criticized for its failure to stop the insurgency and restore peace and security to the northeast states most impacted by the conflict.

It is critical that the international community press President-Elect Buhari to follow up on his campaign promises to not only free the Chibok girls, but to restore the rule of law and protection of human rights in the north as well as throughout the country. The violence of Boko Haram is just one challenge that must be addressed by the new leadership in Abuja and these challenges will not be solved by military means.

Aisha deserves to live in a country where she can go to school without fear, where one’s religion does not mean a death sentence and where her government is willing to invest in the safety of its people.

We cannot wait another year to free the Chibok Girls and end violence against women and girls in Nigeria.

For more information, read the Amnesty International report “Our jobs were to shoot slaughter and kill” on Boko Haram’s reign of terror in northeastern Nigeria.