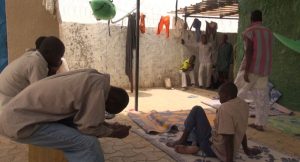 Three concrete block buildings bake in the heat of Diffa, Niger. They would likely go unnoticed, if they weren’t guarded by soldiers armed with Kalishnakovs and ringed by barbed wire perched atop the walls, like reported by voanews.com .

This is a deradicalization camp for former Boko Haram fighters. The camp, which opened six months ago, houses about 150 people, most of them ex-jihadists, accompanied by their wives and children.

Some of the occupants have threatening faces. There are teenage faces too, belonging to boys who weren’t really fighters.

Ibrahim is one of them. He says Boko Haram kidnapped him when he was 12.

“It was a Friday. My dad told me to go the fields and he would join me after the prayer,” he told VOA. “Two men came on a motorcycle and took me. They said I could become a delinquent.”

Ibrahim studied the Quran under Boko Haram for two years before he was able to escape.

Thousands of other children and teenagers have been kidnapped by Boko Haram since it began its insurgency in northeastern Nigeria in 2009. The most famous are the Chibok girls, abducted from a secondary school in Borno state.

Many of the boys were turned into fighters for the group, which says it wants to impose a radical form of Islamic law across Nigeria.

At its peak, Boko Haram controlled parts of three states and was attacking localities in Niger, Cameroon and Chad.

A multinational force has greatly weakened the group since 2015, but authorities in Niger believe the group cannot be defeated strictly by military means.

Diffa governor Dan Dano Mahamadou Lawaly says a bigger, permanent deradicalization center will open in a few weeks in Goudoumaria, a town northwest of Diffa and a bit farther from the Nigerian border.

He tells VOA that there, imams will instruct the ex-fighters on a more traditional, peaceful version of Islam. They will also receive job training, as most joined Boko Haram in part because they were poor and needed a source of income.

But some people in the current camp would prefer not to be transferred. Fatima Ibrahim is 20. Boko Haram kidnapped her four years ago near Maiduguri, the capital of Nigeria’s Borno State.

“I hope I will return soon to Nigeria. I was forced to marry Boko Haram fighters and my parents do not even know I am here,” she said.

Many fighters interviewed by VOA deny any wrongdoing, or minimize their participation. Malam Boucar Adam says he used to be a teacher before joining Boko Haram. He says he served as a doctor for the jihadist organization, but left because of factional tensions.

“Shekau militants and Mamman Nur ones fought six times. It is because of ideology. Islam is a peaceful religion. A good Muslim would never kill people,” he said.

Committed Boko Haram fighters would disagree with that belief. The group has killed an estimated 20,000 people in the past eight years.

Ex-fighters describe the group as weak, but add it will take years to defeat the ideology that jihadists spread across the region.