You are here: Home / MidEastGulf / Battle rages for Aleppo as government forces target rebel supply lines
Hundreds of al-Nusra fighters engaged in clashes with Syrian army and militias in countryside north of city, according to monitors. 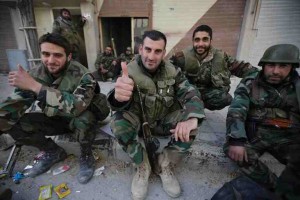 Hundreds of al-Nusra Front fighters were reported to be battling Syrian pro-government forces on Wednesday in the countryside north of Aleppo as an offensive backed by Russian air strikes threatened to sever rebel supply routes into the northern city.

The Syrian Observatory for Human Rights, a UK-based monitoring group, said at least 750 al-Nusra fighters had left Aleppo city in a convoy and were engaged with clashes and shelling with Syrian army and pro-government militias near the town of Ratyan.

Al-Nusra, al-Qaeda’s affiliate in Syria, fights alongside other Syrian rebel groups as part of the Jaish al-Fatah, or Army of Conquest, coalition.

A Syrian army source told Russia’s RIA Novosti news agency on Wednesday that pro-government forces had already cut off two key supply routes from Turkey into the suburbs of Aleppo.

“The army and our soldiers have cut [the] Mayer-Anadan and Azaz-Aleppo routes. Thus, the path for delivery of ammunition and reinforcements from Turkey to the northern outskirts of Aleppo has been cut for the militants,” the source said.

Government forces took several key villages north of Aleppo city on Tuesday in an advance that could break a long-running rebel siege of Shia villages Zahraa and Noble, according to the Observatory.

The fierce offensive, which has been backed by Russian air strikes on rebel-held territory, has derailed Syrian peace talks in Geneva with opposition negotiators on Tuesday calling off a meeting with the UN envoy to Syria and accusing Russia of choosing “military escalation against the Syrian people”.

A human rights watchdog on Tuesday said that at least 61 civilians had been killed by pro-government forces since the launch of the UN-sponsored peace talks in Geneva last week, with the highest number of fatalities in Aleppo.

The Syrian Network for Human Rights said the fatalities included 14 children and 19 women who were killed in attacks by government forces and its allies.

The UN special envoy for Syria warned on Tuesday that if troubled peace talks in Switzerland failed, then “all hope would be lost”.

“But if there is a failure this time, after two previous meetings in Geneva on Syria, then all hope will be lost,” de Mistura said.

Nasan Agha, a spokesperson for the HNC opposition coalition, had earlier said that Russia was choosing to negotiate with fighter jets.

“Russia has chosen military escalation against the Syrian people. If the international community is serious about sponsoring negotiations it must stop the Russian aggression,” Agha said in comments quoted by Al-Jazeera Arabic on Tuesday night.

“We will not withdraw [from the talks] but we may suspend negotiations if we find the path before us blocked off.”

Russia, a key backer of Assad’s government, has been a game-changer for the Syrian government’s campaign against rebel groups since it started its air campaign on 30 September.

Russia has also been backing pro-government forces in an offensive to recapture rebel-held territory in Latakia province, which has forced many refugees to flee.

US Secretary of State John Kerry urged Syrian opposition negotiators to remain in peace talks despite Russian bombardment and government advances, saying that a ceasefire would be rapidly implemented if the two sides started to negotiate.

“To the question of Russia bombing while they are sitting at the table: we are all extraordinarily sympathetic to the limits of propriety and common sense in the opposition sitting at a table while somebody continues to bomb you,” Kerry told reporters in Rome where he was meeting US allies fighting the Islamic State (IS) group in Syria and Iraq.

“But the agreement at the United Nations and the agreement in Vienna [talks that set the agenda for the Geneva conference] is that when the political dialogue begins there will be a ceasefire. So the hope, the expectation is that it shouldn’t take long and we’re not requiring people to sit at the table for months. That would be crazy.”

Kerry noted that Russia had supported a United Nations Security Council resolution that insists upon a ceasefire as soon as talks on a Syrian political transition begin.

“And the Iranians can control the IRGC and Hezbollah,” he added, referring to Iran’s Revolutionary Guards Corp and the Lebanese militia, which have sent troops to back Bashar al-Assad’s regime. And it’s up to those of us who support the opposition to get the opposition to live by a ceasefire.”