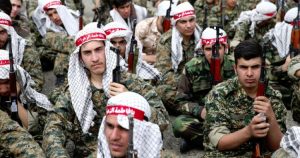 The Basij, known as the so-called “Mobilization Resistance Force,” is a subdivision of the terrorist-designated Revolutionary Guard (IRGC) and the main force used in suppressing protests and imposing crackdown measures on the Iranian people.

Basij is one of the five forces of the IRGC. The four other branches are the Ground Forces, Aerospace Force, Navy, and the Quds Force. Basij is one of the most important instruments of repression of the Iranian mullahs’ regime. Its dimension has spread to all political, social, cultural, strata of the society.

Founding of Basij
On November 25, 1979 the Basij was established based on orders from regime founder Ruhollah Khomeini and tasked to confront the growing support of the Iranian opposition People’s Mojahedin Organization of Iran (PMOI/MEK). It was officially registered following the approval of the Majlis (parliament) in 1980.

Basij played a key role in sending many schoolboys to the frontlines during the bloody Iran-Iraq war of the 1980s. According to regime sources, more than 36,000 young students were killed during the eight-year war. These teenagers were used to “clear minefields” with promises that they would go to heaven.

In fact, having a single military force, the artesh (army), should be enough for a country, but in Iran, in addition to the army, the regime created the IRGC and the Basij as its own military force with the aim of domestic suppression and export of terrorism abroad.

Following the Iran-Iraq war, Basij launched its suppressive activities in the name of “Promoting Virtue and Forbidding Vice,” an initiative used to suppress and harass youths in the streets.

In the beginning of the year 2000, the IRGC used the Basij to suppress protests in various cities such as Eslamshahr and Mashhad. At the time, Hossein Ta’eb, the current head of the IRGC Intelligence Organization, oversaw the crackdown operations.

In 2008 Basij reorganized its ranks and files to confront public protests more effectively. Basij established an independent command post in every province and during this period its role in repression became more prominent. Former IRGC chief Mohammad Ali Jafari said that the Basij’s role is important to confront popular protests, and internal economic, political, and external threats.

Following the post-election nationwide protests in 2009, the regime’s Supreme National Council handed over the security of Tehran (from June 15 to August 16) to the Sarrallah Basij Base and its other sub-entities in the Mohammad Rasoul Allah Basij base.

In 2010 Ezattollah Zarghami, then head of state Radio and Television, acknowledged the Basij’s role in suppressing the 2009 protests. “The Basij forces had to fight back with clubs and sticks,” he explained. Following the deadly crackdown on 2009 protesters, Khamenei upgraded the Basij from the “Mobilization Resistance Force” to the “Organization for the Mobilization of the Oppressed” on October 3, 2009, and appointed Mohammad Reza Naqdi as its chief.

The Basij’s Imam Ali, Imam Hossein, and Beit-ol-Moqaddas battalions and 22 other Basij branches were established during this period. Following the Basij’s role in suppressing the 2009 protests, Amnesty International issued a statement calling on the regime to stop using Basij units in the use of force against protesters in Iran.

Basij and social media crackdown
In 2008, the regime also used Basij forces to suppress dissidents on social media platforms. The creation of tens of thousands of blogs in over 10,000 Basij bases was the start of this project. Abdolsamad Khorramabadi, then deputy judiciary chief, said in 2016 that “around 18,000 individuals worked on the internet to hand obtain information and deliver them to intelligence, security and judicial institutions.”

Following the 2009 protests, the Basij also played a vast role in suppressing dissidents and ordinary Iranian citizens. Among them was the murder of Ms. Zahra Bani Yaghoub who was held in detention since 2007 in a Basij detention center.

During the 2017 and 2018 nationwide protests, Basij was the regime’s main suppressing arm. Also, during the November 2019 nationwide protests that erupted following a major gasoline price hike, Basij and IRGC forces opened fire on protesters and gunned down more than 1,500 protesters. Khamenei later hailed Basij’s intervention. The Basij chief said at the time that his forces were present everywhere needed by the police to suppress protesters. As many regime officials have acknowledged, the Basij’s main mission is to maintain the regime’s security in the streets.