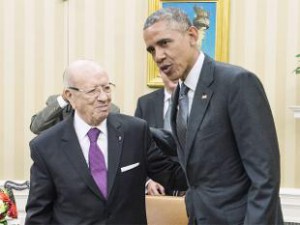 US President Barack Obama said on Thursday that he plans to designate Tunisia as a major non-NATO ally of the United States, recognizing the country’s democratic progress after the 2011 Arab Spring uprising.

After a meeting with Tunisian President Beji Caid Essebsi in the Oval Office, where the leaders discussed instability in neighboring Libya and the region, Obama said the United States will provide short-term aid so Tunisia can complete economic reforms.

“At this critical time in world history, we think it’s very important for us to continue to expand the economic assistance that we’re providing so that ordinary Tunisians can feel the concrete benefits of a change to a more open and competitive economy,” Obama told reporters.

The White House said the US would offer up to $500 million in loan guarantees to the north African nation if needed for economic reforms.

“I committed that as Tunisia continues to embark on important structural reforms to the economy, that we will not only provide short-term aid, but also try to provide the kind of bridge and support that’s necessary to complete those reforms,” Obama said.

The leaders also discussed joint counterterrorism efforts and the need to stabilize Libya “so that we don’t have a failed state and a power vacuum that ends up infecting the situation in Tunisia as well,” Obama said, referring to Tunisia’s much larger neighbor to the East.

Essebsi told reporters that his country has “a long way ahead of us” to completely transform its political system and economy and needed support from the United States.

“The democratic process is always vulnerable and threatened by terrorists, by parties that do not believe in democracy,” Essebsi said, speaking through a translator.