You are here: Home / Europe / Banned german jihadist group with Isis links is active in the UK 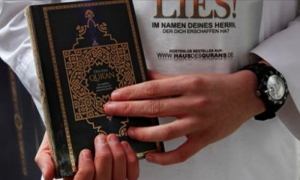 An investigation by The Independent has found that an extremist group banned in Germany is actively attempting to recruit people in Britain’s cities.

Die Wahre Religion (DWR) – The True Religion –  has been credited with inspiring more than 140 Islamic State fighters with its ideology. It has been banned in Germany, but the group’s Quran distribution campaign Lies! has spread to countries like the UK and France, even as far as Brazil.

Because there is no law proscribing the group in the UK, it can – for the moment – continue the campaign unhindered until the Government adds it to the list of banned terrorist organisations.

Last Sunday, representatives from the group were handing out the Quran from a stall on Oxford Street in London. They have done the same in cities like Nottingham and Leicester, and have radio broadcasts in which they share their views.

The newpaper revealed that the Home Office would not comment on whether it was going to block the group under the Terrorism Act 2000.