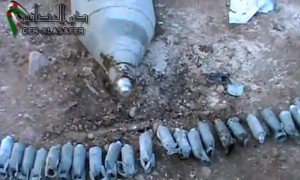 Islamic State (Isis), Syrian government forces, both sides in the conflict in eastern Ukraine and Saudi jets attacking targets in Yemen have all used cluster bombs and rockets banned by international treaty, according to an authoritative new report.

Sudan’s armed forces have used cluster bombs and the devices have also been dropped on targets in Libya, it says.

British-made Tornado GR4 and Eurofighter Typhoon aircraft belonging to the Saudi air force have been deployed in attacks against Houthi rebel forces in Yemen, but it is not known whether they were armed with cluster bombs.

The Ministry of Defence said in June that Britain had provided “precision-guided weapons” to the Saudi air force. It said: “The use of of these weapons is a matter for the Saudis, but we are assured that they will be used in compliance in international law.”

Cluster bombs scatter bomblets over a wide area and many do not explode on impact, but kill and maim civilians long after the initial bombing raids. Civilians accounted for 92% of all recorded casualties, half of whom were children, in 2010-2014. The bombs were banned in international law by a 2008 treaty that has been signed by more than 100 countries.

According to Thursday’s report by the Cluster Munition Coalition, global casualties of cluster bombs to date exceed 55,000, with the largest number of confirmed casualties recorded in Afghanistan, Iraq, Lebanon and Laos. There have been more casualties in Laos than any other country, a legacy of massive US cluster bomb strikes during the Vietnam war more than four decades ago.

Ukrainian government forces and Russian-backed anti-government forces used cluster munition rockets in Donetsk and Luhansk provinces of eastern Ukraine, in attacks that started in 2014 and stopped after a February 2015 ceasefire, according to the report.

Cluster bombs were dropped on two locations in Libya in early 2015, but it was not possible to determine who was responsible, and Sudan’s armed forces used air-dropped cluster bombs in South Kordofan province in the first half of 2015 and previously in 2012, says the report.

“More countries are embracing the ban on cluster munitions by joining the treaty and rapidly destroying their stocks – evidence that the treaty is working well five years on,” said Mary Wareham of Human Rights Watch.

“The new use of cluster munitions by a handful of armed forces outside the ban has been met with swift and strong condemnations, showing the stigma against their use is growing stronger.”

Though a US official last month said his country was aware that Saudi Arabia has used cluster munitions in Yemen, the UK’s cautious attitude was criticised by campaigners.

“The UK should condemn the use of cluster munitions in Yemen, just as it has condemned their use in Sudan, Syria and Ukraine this year,” said Thomas Nash, director of the UK-based weapons monitoring organisation Article 36.

“UK efforts to water down international condemnation of cluster bombs show a callous disregard for the human suffering caused by these weapons.”