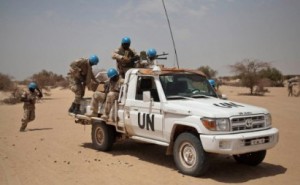 A Bangladeshi peacekeeper was shot dead and another wounded, the United Nations said on Tuesday, in the second attack in days in Mali’s capital on what is considered the world’s most dangerous UN mission.

A statement from Minusma, the UN’s peacekeeping force in Mali, said “an incident” involving one of its vehicles took place in the area of Bamako airport.

“One peacekeeper was wounded, another succumbed to his injuries,” the statement said, adding that an investigation would determine the “exact circumstances of the incident.”

A Malian security source told the reporter overnight on condition of anonymity that the soldiers were targeted by “unidentified armed men” but that account was thrown into doubt by an initial inspection of the UN vehicle.

“We have launched an investigation to find out what exactly happened since, on the face of it, there are no bullet holes, just traces of blood, in the vehicle,” the source later clarified.

Bangladesh is the largest contributor to the 10,000-strong mission, with more than 1,700 troops and police on the ground.

One of the peacekeepers, both ranked as privates, died on the scene and the other was rushed immediately to hospital with bullet wounds after the ambush on their SUV, the Bangladesh army said.

With 35 peacekeepers killed in combat since Minusma’s inception in 2013, the UN has described northern Mali as the deadliest place on Earth for its personnel.

The force is regularly attacked by militants in the north, but had not been a direct target in Bamako before an assailant opened fire on a Minusma residence in the city’s Faso Kanu neighbourhood on Wednesday last week, wounding a civilian guard.

No group has claimed responsibility for either attack, but they come at a time of strained relations between the government and Minusma, which has complained that its impartiality has been “regularly called into question.”

Reacting to criticism of the mission by Malian President Ibrahim Boubacar Keita, the force said on May 15 that “neither its contribution nor its sacrifices are accorded their proper value.”

Keita’s broadside came at the end of a speech by UN Secretary General Ban Ki-moon, read out in Bamako by the UN’s chief peacekeeper Herve Ladsous, lamenting serious violations of ceasefire agreements “on all sides.”