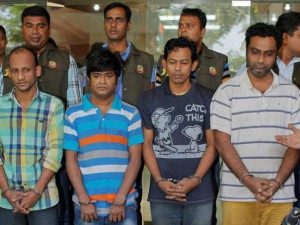 Bangladeshi police have arrested four people in connection with the killing of an Italian aid worker who was shot dead last month in the first attack in the country claimed by Islamic State.

Cesare Tavella (50), was shot in Dhaka’s diplomatic quarter by three gunmen on a motorcycle on Sept. 28. Attacks on foreigners are rare in Bangladesh, despite a rising tide of Islamist violence over the past year that has seen four online critics of religious militancy hacked to death, among them a U.S. citizen of Bangladesh origin.

Days after Tavella was shot, a Japanese man was killed. Islamic State claimed responsibility for both attacks and police detained two suspects in connection with the second killing.

The four arrested for the attack on Tavella were caught in different parts of the capital overnight and police also recovered the motorcycle used in the killing, police said.