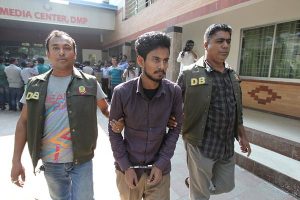 Chasing a lead generated by SIGINT interception, Bangladesh counter-terrorism officials have nabbed a militant of radical Islamist group Ansar-al-Islam, who has admitted to planning an attack on Jatiya Sangsad (parliament), like reported by socialnews.xyz.

Ansar radical Sakib has confessed to his plans to attack the parliament after his arrest from Dhaka’s Sher-e-Bangla Nagar area on Wednesday evening.

Ali Hasan Osama is seen as a spiritual leader like Mufti Jasim Uddin Rahmani, who was convicted and sentenced to five years in prison in connection with secular blogger Ahmed Rajib Haider’s murder.

Ansar use Osama’s provocative speeches and books among their rank and file.

CTTC has reasons to believe that Sakib was member of the Ansar secret hit cell which was planning an attack on the Jatiya Sangsad. Other members of the cell and its leader are still at large, but CTTC has “useful leads” it does not want to reveal at this moment.

“The operation to foil the threat is still on and we are going for other members of the cell who are absconding,” a CTTC official said.

It seems a Pakistani Islamist group, possibly Lashkar-e-Taiba or Jaish-e Mohammed was the mastermind behind the attack and the Ansar-al-Islam in Bangladesh was their preferred choice in the country to carry it out, they said.

They were operating in Bangladesh under cover of a Islamist humanitarian group working in Rohingya camps, the officials said.

Officials privy to Sakib’s disclosure point to a plan in which a small cell would infiltrate the Jatiya Sangsad building and storm the hall during the session, lobbing grenades and firing indiscriminately to kill maximum number of lawmakers.

Since most of them are from ruling Awami League, they would be “legitimate targets”.

Sakib has hinted that their Pakistani handlers were interested in a high kill rate rather than hostage taking, which seemed the target of the attack on Indian parliament on December 13, 2001.

A similar max-kill strategy went into the August 2004 grenade attack on Prime Minister Sheikh Hasina’s rally in Dhaka. BNP leader Tareque Rahman, believed to be close to Pakistan’s ISI, is said to have commissioned the attack and his cronies planned with cooperation from ISI ‘covert station’ in Dhaka , according to Bangladesh intelligence sources.

“Essentially, the 1975 coup strategy of total elimination has influenced all these terror attack plans and this one would no different. The target is complete elimination of Awami League leadership to the extent possible, ” said Bangladesh watcher Sukhoranjan Dasgupta, author of a book on the 1975 coup that wiped out almost all of Sheikh Mujibur Rahman’s family.