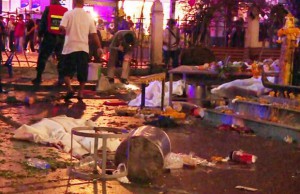 Six people, including a Pakistani and three women, have  been detained by Malaysian and Thai authorities as part of their probe into Thailand’s deadliest bombing at a Brahma temple last month that claimed 20 lives.

“We are assisting Thai police regarding this probe. We feel these three can assist us in the investigation,” he was quoted as saying by the Star.

Khalid, however, said the suspects would not be handed over to Thai police just yet.

“We feel there is no need at present to hand them over to the Thai authorities. We are working together with our Thai counterparts. Let us investigate the matter first,” he said.

Police detained three women and seized travel bags and computers for DNA and traces of fingerprints to see whether they matched with the DNA samples of those involved in the bomb attacks.

Two university students rented the room and a couple of months ago a middle-aged woman had moved in with them, sources were quoted as saying by local media.

Lt Gen Sriwara said suspects connected to the bombing did not stay in the room, but they came to the room and asked the tenants to hold on to their personal belongings.

A police investigation found that three men had brought something to keep in the room and were believed to have fled the country, the source said.

During the search, the three women in the room were taken for questioning at a military camp. A source said the mother of one of the students had links to a man who carried out the bomb attack at the Sathon pier.

The woman reportedly arranged a taxi for the suspect to the pier.

Thai authorities have arrested two suspects in connection with the twin bombings last month. One of them, Mieraili Yusufu, identified the alleged mastermind as Abdulrahman, also known by the alias Izan.

Izan left Thailand on a Bangladesh-bound flight on August 16, a day before the bombing. Mystery still surrounds the motive of the August 17 bombing that left 20 people dead in the heart of Bangkok and the blast at the pier in which no one was injured.