You are here: Home / MidEastGulf / “Band of brothers”, the Christian militia taking on Islamic State in Iraq 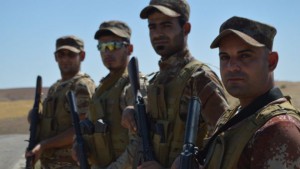 Across the sun-scorched landscape of the Nineveh Plain in Iraq, north of Mosul, a small contingent of fighters in sand-coloured uniforms is on patrol, 7.5 miles (12km) from the frontline with the self-styled Islamic State.

Nothing unusual in meeting men with guns in this part of the world, of course. But this unit is something new – these are all Christian soldiers.

Assyrian Christians say they are descended from the 1st Century peoples evangelised by the disciples of Jesus Christ. They still speak Aramaic, the language spoken by Jesus.

They have suffered persecution before – in 2006, for example, when Sunni Muslims attacked some Christian areas. Then last year, Islamic State (IS) militants drove them from Mosul, Qaraqosh and other major Christian cities.

Now, a group of Assyrian Christians with military experience has said it is time to take up arms and make a stand.

‘We will stay in our land’

In charge of the project is former Iraqi army general Behnam Aboosh. In 2003 along with the rest of the army built by Saddam Hussein, Gen Aboosh – once responsible for anti-aircraft defence of northern Iraq – was sent home by the Americans.

“Some called it liberation; depends on your point of view!” the general told me with grin.

Sitting at home in Mosul, he watched as his country descended into sectarian chaos. Then, in 2014, he was forced to flee Islamic State bombing, with his wife, daughter, and three sons. Eventually, they found a house in Dohuk near the Nineveh Plain.

With a picture of Pope Francis on the wall behind him, Gen Aboosh told me he decided his people had done enough running.

With some other Christian ex-officers he petitioned the Kurdistan government of northern Iraq for permission to form a defence force, to stand alongside the Kurdish Peshmerga forces.

After months of negotiations, he was given six weeks’ access to a military training area near Kirkuk. Around 500 Christians, out of 2,000 who had volunteered, received basic training. The Nineveh Plain Protection Unit (NPPU) was formed.

“We will protect our land”, says Gen Aboosh, “not just from Islamic State. I tell you, on all the land they freed from ISIS [Islamic State], there is a big problem. Many people want to take our land. We will stay in our land!”

Caldo Ogana, from the Assyrian Democratic Movement, the political party backing the NPPU, told me why he believes the Christian militia is necessary.

“The Nineveh Plain lies between Kurdistan and Sunni people. Sunnis and Kurds are struggling against each other. This area is full of oil and very rich. After ISIS is beaten, there will be another battle.”

Assyrian Christians fear they and other minorities will be the losers as those two big groups fight for dominance.

Last year, when Islamic State attacked, no-one came to save them, says Caldo Ogana. “If we don’t plan now how to protect minorities, we will lose the minorities from the Middle East.”

Athra Kado, a teacher of Aramaic-turned-Christian fighter, told me he has no choice but to take up arms.

“It’s about my family. My family is behind me and if I left, they would be dead, killed by ISIS or another group.”

In the ancient villages of the Nineveh Plain, monasteries and ornate graveyards with sandstone mausoleums testify to the long history of Christians in this part of Iraq.

Athra Kado says that if their story is not to come to an end, fighters like him are the only hope.

“If there are no military units from our people, to protect our own people, I don’t think there will be any Christians here in less than 10 years,” he says.