You are here: Home / Senza categoria / Ban Ki-moon arrives in Baghdad on an official visit 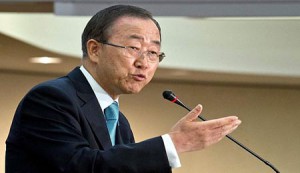 UN Secretary-General Ban Ki-moon arrived on Monday to the Iraqi capital Baghdad on an official visit.

An informed source told “Shafaq News”, that “ Ki-moon will meet with Iraqi officials during his visit and will discuss with them a number of issues, including the war against ISIS terrorist organization and the situation of displaced people fleeing from their areas.”

Thousands of families have been displaced inside and to outside Iraq after ISIS and their allies dominated a lot of regions and cities in the north and west of the country, since mid of last year.